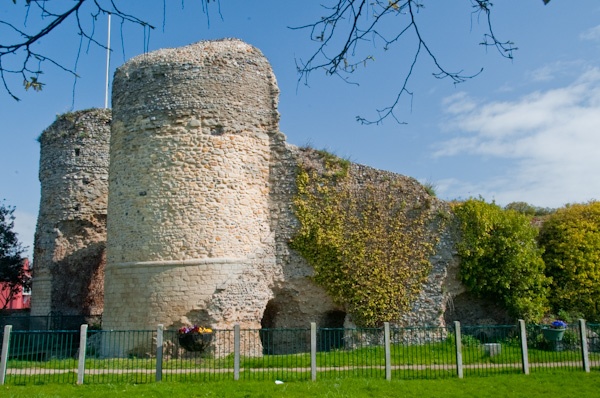 Bungay Castle is a late 12th-century castle erected by Hugh Bigod, the powerful Earl of Suffolk. Bigod was one of the strongest opponents of King Stephen, who tried to buy his loyalty by granting him the earldom.

The castle was probably complete by 1173 when Bigod joined with the Earl of Leicester in a revolt against the crown. It is at this point that Bungay Castle enters the popular imagination in a rhyming verse said to have been uttered by Bigod:

"Were I in my Castle
Upon the River Waveney,
I wouldne give a button
For the king of Cockney"

But all Bigod's bluster could not protect him from the ire of Henry II. Henry raised an army and tracked Hugh down at Syleham where the truculent earl was forced to submit. Henry seized Bigod's estates and ordered his castles at Bungay and Framlingham to be demolished.

The royal engineers began to cut a mine gallery under the walls of Bungay Castle in order to bring the fortress down, but Hugh forestalled them by paying the king a hefty fine of 1000 marks to cancel the destruction.

The turbulent life of Hugh Bigod came to an end a few years later in Syria, where he died while on Crusade. Richard I restored the Bigod estates to Hugh's descendants, but they settled at Framlingham and left Bungay Castle to decay.

In 1269 Roger Bigod became the 5th Earl and embarked on a rebuilding programme at Bungay. He built a strong gatehouse and enclosed the keep inside a high curtain wall. When Earl Roger died without heirs in 1269 Bungay reverted to the crown, and though it was tenanted on numerous occasions, the fortifications became so decrepit that in 1382 it was described as 'worth nothing a year'.

It finally passed to the Howards, Dukes of Norfolk, in whose hands it remained (with a few short exceptions) until the Duke of Norfolk presented it to the town in 1987. It is now operated by a civic trust, who have erected a combination cafe and visitor centre at the castle entrance.

By far the most impressive feature of Bungay Castle is the impressive twin-towered gatehouse, which stands almost to its full height. Pass through the gateway and things begin to look a bit less impressive, but having said that, there is enough remaining to give a very good idea of the scale and impressive extent of Hugh Bigod's castle. It is a very short stroll from the castle top the market square and the historic church of St Mary's.

More self catering near Bungay Castle >>