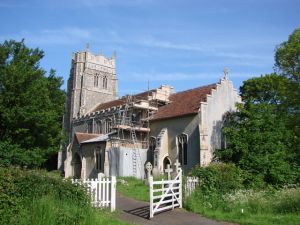 Stonham Parva, St Mary's Church
A lovely 14th-century church located beside a farm which was once the manor house. The bulk of the church was rebuilt in Perpendicular style in the 14th century.

The most immediately striking feature of St Mary's as you approach it is the height of the nave and chancel. That sense of height is further emphasized by the use of stepped false gables, giving the roofline the look of an even higher building.

The gables look almost Dutch in style; certainly, the same technique of stepped gables was frequently used in later 17th century buildings after the Dutch style became popular following the ascension to the throne of William and Mary.

The tower is a particularly noble one, rising in a series of steps - depending on how you count them I reckon there are 8 steps before you reach the parapets, which are accented with slender pinnacles. This must be one of the loveliest towers in Suffolk, a county with no shortage of candidates for that honour!

You enter St Mary's by way of a small 15th-century porch, which is joined to a south chapel. The most interesting bit of the interior is the double hammer-beam roof of the nave, a really splendid work of medieval craftsmanship.

The roof is adorned with carved figures of saints, but unfortunately, religious zealots of the Puritan persuasion lopped off the saint's heads at some point during the religious upheavals of the past.

The other item of great interest is the octagonal font. This dates to the 15th century and is wonderfully carved, with Biblical figures, saints, angels, foliage, and beasts. St Mary's is no longer used for regular worship and is in the care of the Churches Conservation Trust, who generally leave it open.