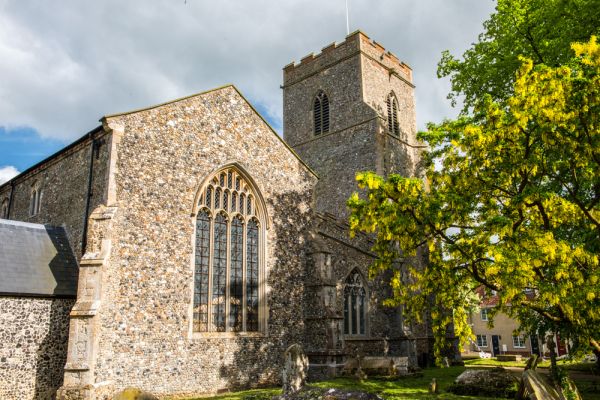 The Assumption of the Blessed Virgin Mary Church in Haughley

The Church of The Assumption of the Blessed Virgin Mary in Haughley (I'll call it St Mary's for brevity) dates to the 12th century and stands in the outer bailey of a Norman castle, overlooking the castle moat. There was almost certainly an earlier church on the site in the Saxon period, so he Normans must have built the castle bailey to encompass an existing church building.

The south aisle was added in the 14th century. It was said to house a piece of the true cross - hence its dedication to the Holy Cross - and became a destination for pilgrims on their way to the shrine of St Edmund at Bury St Edmunds. Pilgrims who stopped to worship at the Chapel of the Holy Cross in Haughley received papal remission of their sins, so the chapel naturally became a popular place on the pilgrims' route.

The church was granted to Hailes abbey in Gloucestershire by Richard, Earl of Cornwall, and you can still see the Hailes coat of arms in the stained glass of the west window. 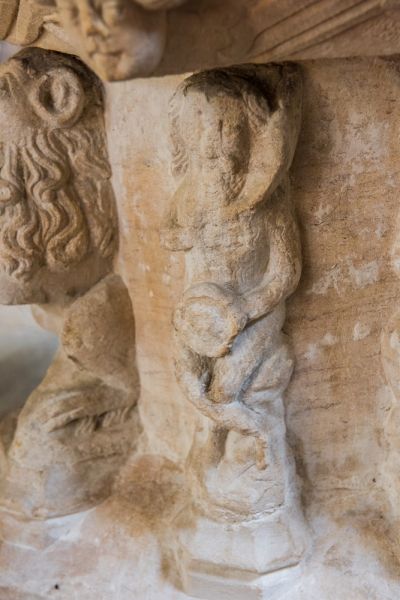 A 'modest' woodwose on the 15th-century font

The church got its long-winded dedication from an annual toy fair held on the Feast of the Assumption. The fair died out for centuries and the church became known simply as St Mary's but when the fair was revived in the Victorian period the church reverted to its original dedication. The fair was suppressed in 1871 due to 'riotous behaviour'.

Entrance is through the west tower, erected around 1330. The inner doorway is a beautifully moulded early 14th-century example, retaining its original wooden door.

The historic highlight of the church interior is a 15th-century octagonal font whose stem is carved with figures of woodwoses, a wild man of the woods figure popular in East Anglia throughout the medieval period. The Haughley woodwose carvings are possibly the best in Suffolk.

Woodwoses are usually portrayed as hairy men carrying clubs, but one of the Haughley woodwoses is unusual, for it shows the figure standing cross-legged, a hat (or perhaps a bowl) over his loins, and the other hand on his heart. It seems odd to see a modest woodwose! 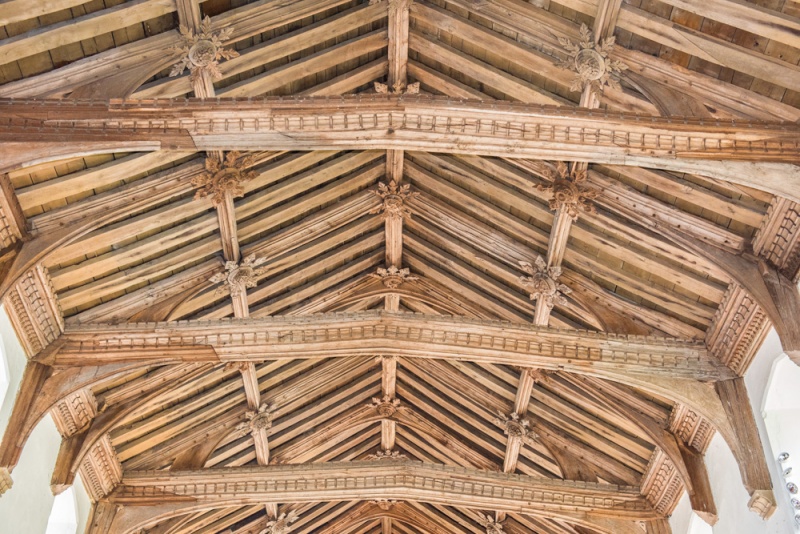 The font bowl is carved with alternating symbols of the Evangelists and angels bearing heraldic shields.

In the northwest corner of the nave are 4 leather fire buckets dating to the 18th century. There used to be 33 fire buckets hanging in the porch. These served as the village's sole means of firefighting in the days before fire trucks and pumps. If a fire broke out villagers would have to grab the fire buckets from the church and form a chain to fetch water from the nearest pond.

In the sanctuary are four 18th century grave slabs to the Ray family. Another ten slabs are set in the nave floor, and seven of these have 16th-17th century memorial brass inserts. On the wall are 7 tablets to members of the local Crawford family, but the best memorial is an ornate wall tablet to Mary Smyth, who died in 1728 at the age of 30.

Also in the nave is a wall monument to Robert Offwood (d. 1756). Hanging from the nave walls are five early 18th-century funeral hatchments.

If you walk behind the church, to the very edge of the churchyard, you can see glimpses of the Norman moat and the treed remains of the castle motte.

The church is usually open to visitors and we found it open when we visited. 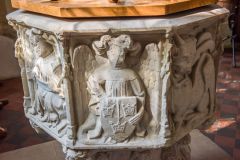 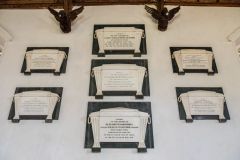 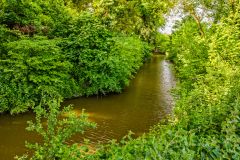 More self catering near Haughley Church