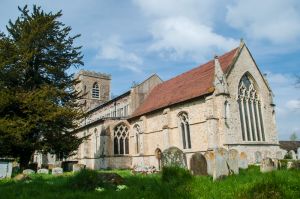 A delightful Decorated Gothic church in a small village just east of Bacton. St Andrew's consists of a Perpendicular west tower, clerestoried nave, chancel, and very attractive flintwork south porch. The windows of the clerestory and nave are especially notable for their lovely tracery.

The parish council calls it 'probably the best building of the Decorated period in all Suffolk,' a rather grand claim, owing much to understandable local pride, but in this case, perhaps justified.

Much of the church is 14th century, and the interior features a very nice 15th-century hammerbeam roof with carved angel figures and lacy ornamental decoration. The eastern bay of the roof is boarded up to form a canopy of honour.

In the chancel is a piscina under a beautifully carved arch, and beside it is a triple-seat sedilia formed by dropping the window sill. There is a fine tomb niche in the north aisle which may possibly be an Easter Sepulchre.

At the west end of the nave is a 14th-century font with an octagonal bowl decorated with trefoil arches. The stem is a later addition, decorated with carved human figures. The clerestory windows retain small pieces of medieval stained glass.

The church is primarily 14th century, with the addition of a 15th-century clerestory in Perpendicular style. The building material is flint rubble, dressed with stone, and the chancel and south aisle are rendered. The west wall of the tower has an exceptionally large archway, probably a later feature inserted to shed light through the window in the west wall of the nave.

In the nave are 15th-century benches, one boasting a finely carved poppyhead end. The pulpit is early 17th century.

NOTE
St Andrew's is usually kept locked, but as of this writing is open on Fridays, or at other times by arrangement. See the church website for contact details. 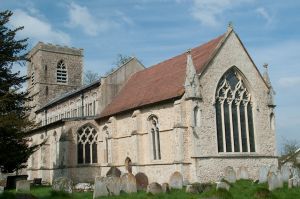