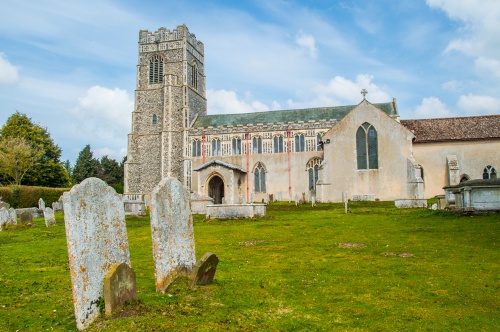 Vehicles on the busy A1120 rush through the village of Earl Stonham, never pausing to turn aside from the hustle and bustle to discover one of the most enjoyable historic churches in mid-Suffolk. The church of St Mary serves the joint parish of Earl Stonham and Stonham Parva.

It is a lovely old building, with a mix of 14th and 16th-century architecture, well worked over by the Victorians. The church consists of a nave, chancel, transepts, south porch and west tower, constructed of flint rubble with freestone dressing.

Within the unassuming exterior lie some fascinating historic treasures, not least a most impressive medieval wall painting of St George slaying a dragon. The head of St George has now been lost to a roof beam, but much of the scene is still clear.

The knight and his foe do battle beneath a castle, watched by figures that may be the father and mother of the princess saved by the knight. The painting at Earl Stonham is one of the clearest examples of the St George story in any parish church in England. 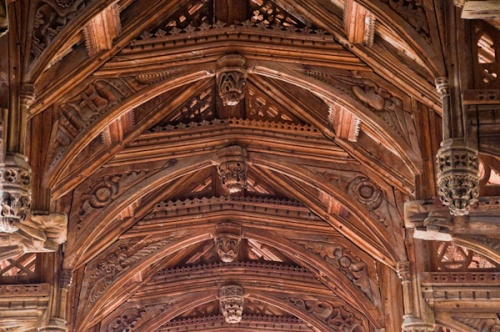 There are further fragments of medieval painting, including a Doom over the chancel arch, and a depiction of the martyrdom of Thomas Becket. There was at one point an Adoration of the Magi, but this has now been painted over, though a framed copy in the church shows what the medieval painting looked like.

But there is much more to St Mary's than wall paintings; the church boasts an utterly superb hammerbeam roof made of delicately carved oak. The decorative carving is magnificent, with animal figures and green men peering out of the carved foliage. Other figures include an owl, terrier, fox, duck, goose, an albatross, and a court fool.

The hammerbeam angels alternate with intricate pendant bosses. These latter are purely decorative, having no structural function. The beams terminate in wall posts with canopied niches for figures of saints and apostles. These figures were defaced by William Dowsing in the 1640s.

It is hard to drag your eyes down from the roof, but when you do you will see a wealth of medieval pews decorated with wonderful bench end figures, including a winged bull, a lion, a three-headed man, and a bagpiper.

There is a wonderfully carved Jacobean pulpit, and on the north side of the sanctuary is a niche which the church guide claims to be an Easter Sepulchre. There is an ancient wooden chest, possibly 14th century, a two-seat sedilia, and a double piscina.

St Mary's is a delight to visit; you'll get a sore neck from staring up at the amazing hammerbeam roof, but it is definitely worth it!