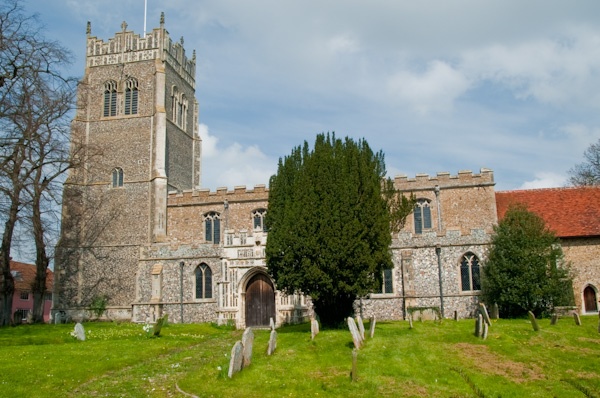 The Suffolk village of Mendlesham is a picturesque place, with timber-framed buildings and that quiet air of timelessness that Suffolk seems to specialise in. At the heart of the village is the 13th-century church of St Mary the Virgin, punctuated with a superb 15th-century west tower.

In the north aisle are 15th-century benches that were brought here from Rishangles church. The benches in the nave are slightly younger, dating to the mid-16th century. The bench ends sport a wonderful array of carved figures, including a dragon biting its own tail.

There are fragments of medieval glass in the north aisle windows, including a figure of a lion sticking its tongue out. 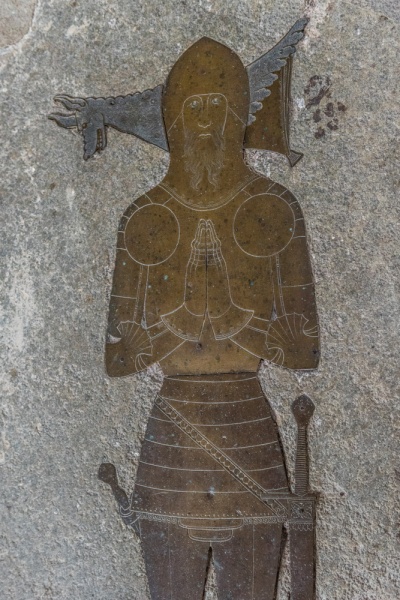 The Lady Chapel stands at the east end of the north aisle. the altar table is 16th century, and if you look closely you can see that one of the table legs has been carved the wrong way around. In the north wall of the chapel is 14th-century glass from Rishangles church, including a likeness of a horse's head and bridle and a figure of St John holding a cup.

There are several very interesting memorials in the chancel including a wall monument to William Cuthbert, who served as a doctor in Mendlesham for over 50 years. The altar rails date to around 1660.

The beautifully carved pulpit was installed in 1620 and was carved by a local craftsman named John Turner, who also made the wooden font cover at the same time. Nearby is a memorial brass to John Knyvet (d. 1417), showing him clad in armour. One very odd feature about the Knyvet brass is that he is shown with his beard outside his armour. 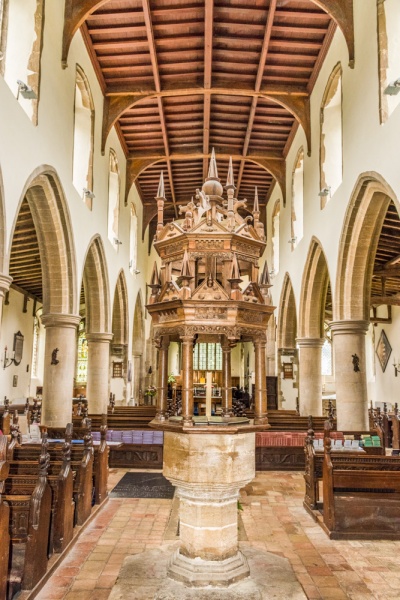 At the back of the nave are two biers for carrying coffins. One is a rare child bier, a scaled-down version of the normal adult bier. Both biers have their original straps.

In the south porch is the Chapel of the Holy Cross with vivid modern wall paintings adding a rather odd touch under the beautifully carved 15th-century porch roof. In the chapel is a memorial to the American Airmen of the 34th Bomber Group, who were stationed near Mendlesham in WWII. A memorial to American servicemen stands in the churchyard to the south of the church.

In the south aisle is a royal coat of arms to George III and a memorial brass to Margaret Arminger. The aisle roof is at least 16th century and one of the beams at the east end has traces of late medieval paintings. The altar stone at the east end of the aisle is late medieval as well, and on the aisle wall is a funeral hatchment. There are medieval glass fragments in the east window.

One unusual feature at Mendlesham church, and one that is not normally on display to visitors, is a rare armoury in the chamber above the north porch. Church armouries are not unique, but it is rare to find one as complete as this. The parvise, or chamber over the porch entrance, has been used as the parish armoury since 1593. The armoury has a collection of Elizabethan armour brought together at the time of the Spanish Armada invasion.

There are breastplates, helmets, a crossbow, and one of only 4 original Elizabethan longbows in existence. Another rarity is a 'pauldron', a piece of shoulder armour which is pone of the very few complete specimens in existence. The armoury also holds three parish chests, as well as a copy of the 1717 'Vinegar Bible' and a 17th-century book of sermons.

The armoury is open only on special church open days or by special appointment with the rector. 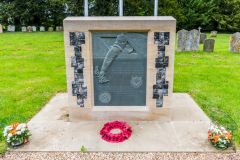 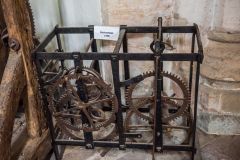 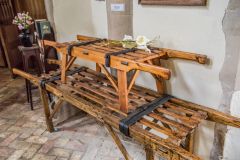