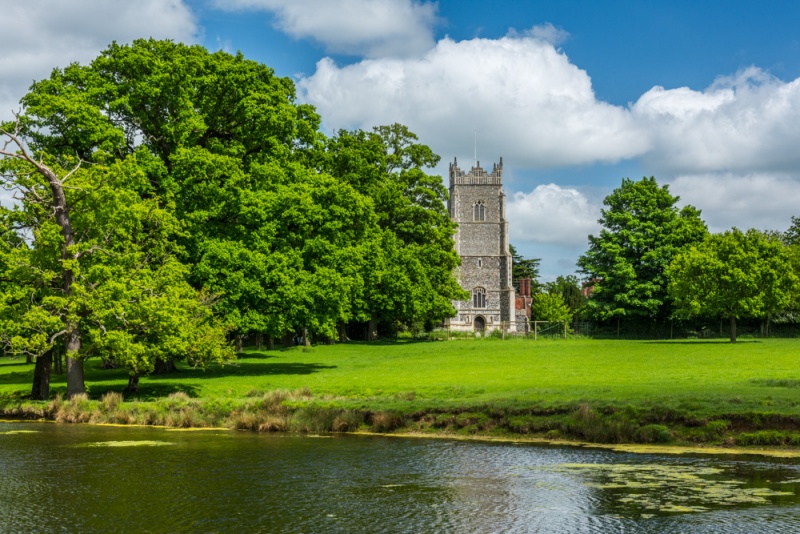 St Mary's is an estate church, standing just outside the grounds of Helmingham Hall, a beautiful Tudor mansion that has been home to the Tollemache family for over 500 years. Beyond the graveyard the ground slopes down to an ornamental lake, then rises to the picturesque red-brick house, bounded by a moat.

The church dates to at least 1258, though the earliest record of a rector comes from 1307. The striking west tower was added in 1488 by John Tollemache of Helmingham Hall to celebrate his marriage to Elizabeth Joyce in the previous year. Tollemache paid £30 for the tower. Unusually, the building plans survive, and are held in the Bodleian Library in Oxford. The result is a wonderful example of Perpendicular Gothic style.

The tower plinth bears the Latin inscription 'scandit ad ethera virgo puerpera virgula jesse' which translates as 'the Virgin Mother, branch of Jesse’s stem, ascends to heaven'. It is curious that this inscription, with its very Catholic sentiment, was added at the same time as Henry VIII's efforts to break from the Catholic church.

The tower was not finished until 1510, and the parapet in 1543, at the same time as the south porch, with its eye-catching vertical flushwork. The north door dates to sometime between AD 1190 and 1300, and is the oldest part of the building. The south door is thought to be early 13th century.

The chancel was restored in classical style in the mid-18th century by Lyonel Tollemache, the 4th Earl of Dysart. In the 1840s Anthony Salvin was asked to draw up plans for further restoration in 1840, but it was not until 1860 that the chancel roof was rebuilt by the 1st Lord Tollemache. Look for a medieval scratch dial on the south-east chancel buttress. 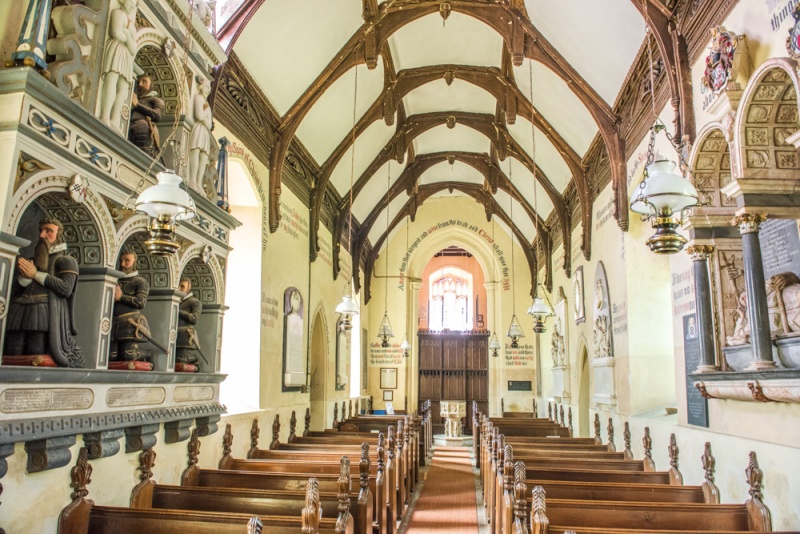 Inside is a 15th-century font, decorated with figures of lions standing on human heads. The nave roof dates to around 1530.

The highlight of a visit to St Mary is the magnificent tombs to generations of the Tollemache family. The most imposing of these was erected in 1615 in memory of the 1st Baronet, who died in 1550. The monument also commemorates three further generations of the Tollemache family, all named Lionel, who died in 1553, 1575, and 1605. Each Lionel Tollemache is represented by a kneeling figure set into a niche, with the eldest Lionel at the top and the three younger ones in a row beneath.

Another striking monument is to yet another Lionel Tollemache (d. 1640), with the effigy of a reclining figure set beneath a pair of arches supported by Corinthian columns.

Two wall tablets were sculpted by Joseph Nollekens (1737-1823). One commemorates Lionel Robert Tollemache (d.1793), with a sculpture of the deceased in an oval medallion. The other is to Maria, Countess Dysart (d.1804), and shows a seated figure with a weeping cherub, or putti, with a lamb.

In the floor are tablets to Vice Admiral JRD Tollemache (d.1837), and to Georgina, wife of John Tollemache (d.1847). In the chancel is a memorial to Sir Lionel Tollemache (d.1727), showing his wife at his feet, and another monument commemorates Lt. Gen. Thomas Tollemache (d.1694). The oldest monument is to Dame Catharine, daughter of Thomas, Lord Cromwell who died in 1620.

Taken as a whole, the Tollemache memorials are a stunning set of monuments spanning over 300 years, beginning in the early 17th century. They are reason enough to visit Helmingham all by themselves.

The walls are profusely painted with Biblical texts, but behind the seemingly innocuous texts lies a fascinating feud. In the mid-19th century, the rector of Helmingham was JC Ryle, who would go on to become Bishop of Liverpool. Ryle and the 1st Lord Tollemache were at loggerheads over a question of dogma, with Tollemache an exponent of Tractarianism, which was then gaining attention.

Lady Georgina Louisa, Lord Tollemache's wife, was extremely religious, and insisted on decorating the church with the texts. Lord Tollemache is said to have selected specific texts to add weight to his arguments over dogma with Ryle.

I have seen it written elsewhere that the texts were painted by Rector Ryle, but the official church guide says they were painted at the insistence of Lord and Lady Tollemache, so I've gone with the official version.

The church boasts a peal of 8 bells presented by the 6th Earl of Dysart in 1816 to celebrate the British victory at the Battle of Waterloo. The Earl had raised a force of 500 men in case the French were victorious at Waterloo and launched an invasion. The Earl's men were an early form of what became the Home Guard.

The church was open when we visited on a Helmingham Hall open day, and as far as we can determine it is usually open to visitors. 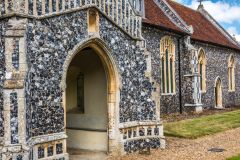 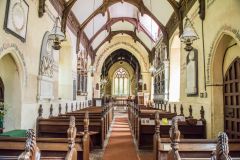 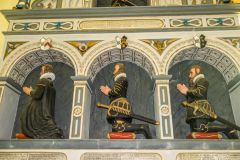 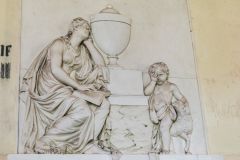 More self catering near Helmingham

More bed and breakfasts near Helmingham