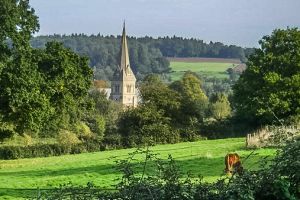 Halstead, Holy Trinity Church
Holy Trinity church in Halstead is one of the first Gothic Revival churches in England to be built in the Early English style that became so popular in the mid to late Victorian period. The church was designed by Sir George Gilbert Scott in 1843-1844.

Scott went on to become perhaps the most successful architect of the Victorian period and was more famously responsible for the Albert Memorial in London. His first attempt to build Holy Trinity almost ended in disaster as the spire collapsed before it was finished. Luckily only minor injuries to the construction workers resulted, and the spire was rebuilt.

Scott's design including walls of brick faced with flint, with limestone dressings and a slate roof. The layout is traditional, with a clerestoried nave, chancel, aisles, vestry, organ chamber, and a tower at the south-west corner of the nave. Entrance is through a porch incorporated into the tower. The east end of the chancel is pierced by a striking wheel window above three lancets. More single lancets illuminate the aisles.

The interior of Holy Trinity is a beautiful Victorian interpretation of Gothic ideals, with a high clerestory admitting great amounts of light. The nave arcades are slender, almost delicate, with alternating octagonal and circular piers.

The font is Victorian, with a square bowl atop an octagonal base. In the south aisle is a memorial screen installed in 1922.

The church stands on the site of a 14th-century chapel dedicated to St Mary. The chapel had vanished by the 18th century, and in the 1840s Mrs Mary Gee of Earls Colne gave money to build a new church, aided by a government grant of £500 according to the 1824 Church Building Act.

Holy Trinity is no longer used for regular services and is cared for by the Churches Conservation Trust. It is normally open daily to visitors.