The intriguing little parish church of St John in Mount Bures stands beside the ruined Norman castle mound that gave its name to the village. The church dates to the early 12th century and is built of coursed flint rubble dressed with limestone and clunch. Look closely and you will see bits of Roman brick quoins embedded in the walls.

The chancel, nave, and central tower are 12th century, or possibly even late 11th century, with the addition of a 15th century south porch. The tower was rebuilt in the 19th century when transepts and a vestry were added. The Victorian restoration efforts were so sweeping that much of the Norman building was lost.

The man responsible was Thomas Harris, who completely removed the tower and replaced it with a larger one. During this work, a series of wall paintings were discovered on the south wall of the nave, at the east end.

Rectors for St John's are recorded from 1326. It seems that some interesting characters held the rectorship over the centuries; in 1552 it was recorded that the rector had a mistress. A few years later, in 1559, the rector was removed because he refused to abide by the new Anglican policies.

The combination of the medieval church and the neighbouring castle motte is unforgettable. 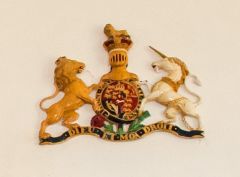 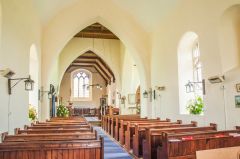