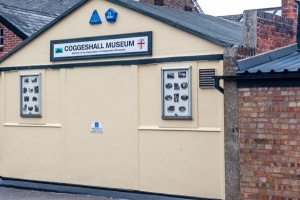 This small museum contains a wealth of information about the Coggeshall area. The museum began in 1990 as a community effort to gather together memorabilia associated with Coggeshall. Local residents donated old photos, artefacts, and a delightful mix of odds and ends associated with the heritage of Coggeshall.

And its quite a heritage; Coggeshall has been closely associated with several industries including the medieval wool trade (which helped pay for the superb 15th-century parish church), lace making, wood carving, and weaving.

In addition to historic artefacts, the museum has genealogical resources for family research, and publishes an extremely useful heritage walk leaflet for exploring the town.

Speaking from personal experience, the leaflet, titled 'A Walk Around Coggeshall' is excellent; we followed the suggested walk and saw so many interesting historic buildings and learned so much more about the history of the town than we ever could have done without the leaflet.

Because the museum relies on donations of material from local people the displays may vary from time to time. At the moment displays include famous local Quakers (Coggeshall was closely linked to the development of Quakerism in the 17th century).

Another fascinating collection relates the story of the King seed company, founded here in 1793, which grew to be the largest seed wholesaler in the world.

You can also learn about famous local people, including the Paycockes, wealthy Tudor wool merchants whose timber-framed house on West Street is now owned by the National Trust, and Thomas Hawkes, a Protestant martyr in the reign of Mary I.

Note: The Coggeshall Museum website has a wonderful collection of information about the area, including quite a few old photographs.

Seasonal opening (generally April-end October) on Sunday afternoons and Bank Holidays. At other times by arrangement for groups of four or more.

More self catering near Coggeshall Museum