HERITAGE HIGHLIGHTS:   One of the oldest surviving timber-framed buildings in Europe 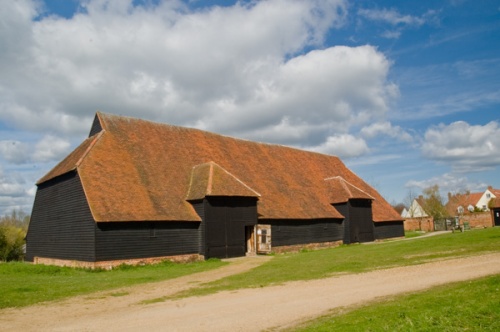 Grange Barn is one of the triumphs of medieval British vernacular architecture, a huge 13th-century timber-framed building associated with a long-lost Cistercian abbey. The barn is one of Europe's oldest timber-framed structures, a weatherboarded building stretching 130 feet long and 45 feet wide (roughly 40 metres by 14 metres).

The massive roof is supported by an elaborate system of timber posts and beams, with 6 interior bays with aisles. The roof is covered in simple red tiles made by hand.

Traditional histories of Grange Barn placed the date of construction in the period 1140-1220, based on Carbon-14 dating evidence. More recent dendrochronology (tree ring) evidence points to a later range of 1237-1270. The barn was heavily altered in the 14th century, and it is this later design we see today. 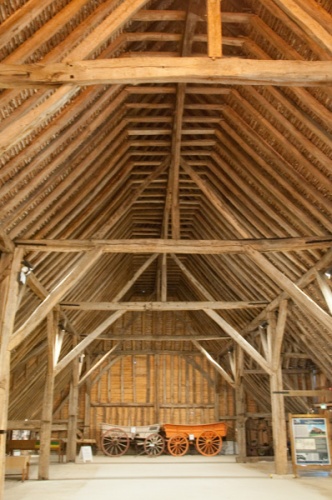 Personally I think the appeal of Coggeshall Grange Barn is the amazing medieval post and beam structure; that's reason enough to make a special trip here, but I think the National Trust must have felt that the structure of the barn by itself might be a bit dull for a wider audience, so they brought in a variety of agricultural displays to fill the interior.

There are traditional farm carts and wagons on display, a threshing machine, and other agricultural tools. There is also a special display of The Saunders Tools Collection, woodcarving tools used by local master carver Bryan Saunders until his death in 1975.

For anyone with an interest in traditional woodworking, the Saunders Collection is a goldmine of fascinating chisels, hammers, knives, measuring devices, and a plethora of other carving tools. 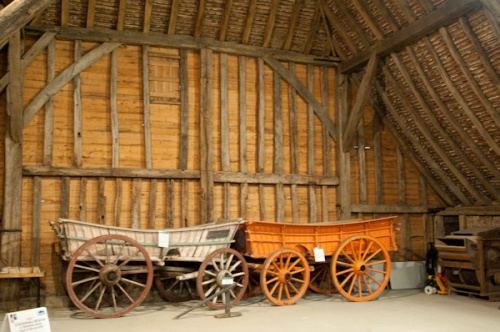 Grange Barn served the Cistercian abbey at Coggeshall. The abbey was founded in 1140 by King Stephen for the Savigniac order, but when that order ceased in 1147 control passed to the Cistercians. Subsequent monarchs made gifts to the abbey and granted them privileges over the town of Coggeshall. This led to inevitable resentment and conflict between the monks and townsfolk.

The abbey diverted the river, enclosed the monastic lands, and built a chapel that 'competed' with the parish church. The local vicar was convicted of fishing in the abbot's pond in 1293, and tensions continued throughout the Middle Ages. In 1381, during the upheaval of the Peasants Revolt, townsfolk raided the abbey, beat the abbot, and destroyed the abbey archives.

The abbey was never terribly large, reaching perhaps 24 monks and 40 lay brothers at its maximum size. By the time the abbey was dissolved by Henry VIII in 1538, these numbers had fallen to merely 6 monks.

Only very partial remains are visible. The most obvious remnant is St Nicholas church, a short walk along Abbey Lane from Grange Barn; the church began as a simple chapel at the abbey gates, and after being used as a farm building for many years returned to use as a place of worship in 1863.

The barn remained in agricultural use until 1960 but was then allowed to decay to an alarming state. The owner wanted to pull down the building, but a local charity group formed to rescue the barn from destruction. It was purchased by the Braintree District Council, then restored in a project lasting 2 years. In 1989 the barn was presented to the National Trust.

The barn is truly an impressive building; it is only when you actually stand inside the barn and look up at the massive roof, supported on oak timbers and braced with carefully arranged cross-braces that you begin to appreciate just how impressive a piece of architecture it is. It is like a vernacular cathedral in its scope and impressive height and space.

It won't take long to look over the barn interior, collections of farm equipment, and woodworking tools, so if you have the time it is worthwhile to stroll down Abbey Lane opposite and see St Nicholas church, the former abbey chapel. And a slightly longer stroll down to West Street in the centre of the village brings you to Paycockes, another National Trust property and one of the finest medieval merchants houses in England. 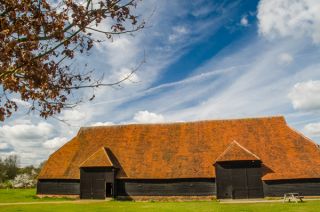 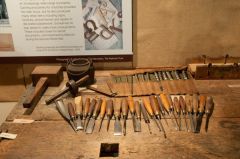 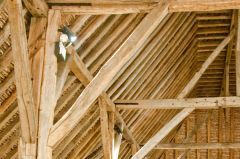 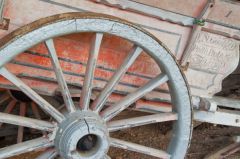