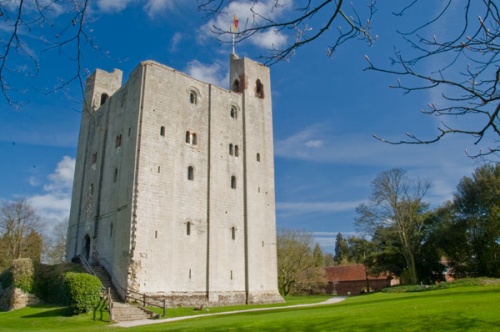 Inside the Hedingham Castle bailey

The De Vere family were among the most powerful in England during the early medieval period. The first Aubrey de Vere fought with William the Conqueror and was rewarded with vast estates in Middlesex and Essex.

The second Aubrey de Vere was one of the influential barons who supported the Empress Matilda's bid for the English throne after the death of Henry I. In fact, his support led to his violent death in 1141 when the citizens of London rose up in revolt against Matilda and she was forced to flee the city.

Starting around 1130 De Vere built Hedingham Castle, possibly to a design by the Archbishop of Canterbury, Theobald of Bec. The castle was finished by his son, another Aubrey. Matilda rewarded Aubrey III for continuing his father's loyalty to her cause by naming him the first Earl of Oxford. Today Hedingham is still owned by a descendant of Aubrey de Vere.

De Vere's creation at Hedingham is one of the finest keeps in England, standing 110 feet high, with four storeys still largely intact. The keep is built of ashlar brought from Barnack, near Peterborough, and is square in plan, with tall recangular turrets at opposite corners projecting above the rooftop. The windows are little more than narrow slits near ground level but become progressively larger with each storey.

There was originally a forebuilding standing in front of the entrance, with a set of stairs leading to a first-floor entrance. The forebuilding is now mostly ruined, but the Norman entrance door, with its portcullis groove, is still used. The keep stood inside a large enclosure, protected by a stone curtain wall, but only fragments of the wall remain.

The main inner chamber is a huge Banqueting Hall, with a high roof supported on a massive 28-foot arch, one of the largest Norman arches in England and a major feat of early medieval architecture.

You can get a good idea of just how impressive this chamber is by ascending a set of spiral stairs at one end of the hall to a Minstrel Gallery built into the thickness of the wall. 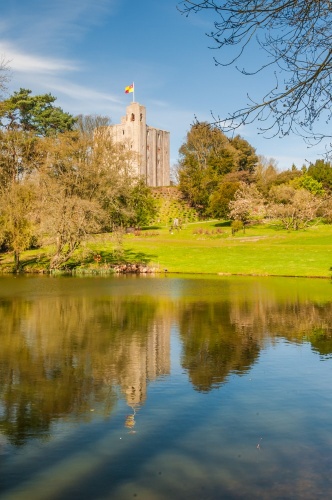 Another view of the castle exterior

The de Veres of Hedingham

Throughout the Norman and medieval periods the de Veres were in the forefront of national politics. They were traditionally Lord Great Chamberlains to the reigning monarch, and many kings and queens visited Hedingham Castle, including Henry VII, Henry VIII, and Elizabeth I.

The 2nd Earl went on Cruade with Richard I, and the 3rd Earl was among the leaders of the barons who forced king John to sign the Magna Carta. King John took his revenge, and in 1216 his armies seized Hedingham after a brief seige. The following year the royal forces were ousted by the Dauphin of France and the de Veres regained their castle.

During the Wars of the Roses John de Vere, the 13th Earl of Oxford, supported the Lancastrian cause and helped lead Henry VI's armies at the Battle of Barnet in 1471.  Not surprisingly Edward IV seized his estates. De Vere helped Henry VII defeat Edward's successor, RichardIII, and the grateful Tudor king restored his lands and titles. Henry invited de Vere to stand as godfather to his eldest son, Prince Arthur.

The Earl entertained the new king at Hedingham, but according to a tale (possibly apocryphal) related by Sir Francis Bacon, de Vere made the mistake of flaunting his wealth by showing off his huge number of retainers. Henry's strict laws made such a large number of retainers illegal, and the king fined de Vere a vast amount of money.

The Earl had enough wealth to pay the fine and transform much of his medieval castle to a paltial Tudoor residence. Hardly any trace of this grand house remains, save for a red brick bridge betwen the castle motte and outer bailey. 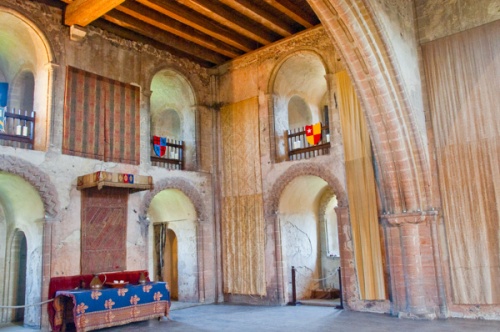 The 15th Earl attended Henry VIII at the Field of the Cloth of Gold and held the crown during the coronation of Anne Boleyn as Henry's second queen. The 16th Earl led Elizabeth I to her coronation, and his Countess served as Elizabeth's maid of honour. The 17th Earl de Vere was one of Elizabeth's great favourites and a noted poet.

Just how talented a poet the Earl was depends on which conspiracy theory you adhere to; repeated theories have surfaced that the Earl actually wrote the plays and poetry attributed to William Shakespeare. This theory was dramatised in the 2011 film Anonymous, starring Rhys Ifans.

The title died out in 1703 when the 20th Earl died without a son. His daughter married the Duke of St Albans, the illegitimate son of Charles II and Nell Gwynn, but in 1713 Sir William Ashhurst, Lord Mayor of London, bought Hedingham and the de Vere connection was lost for the moment.

Ashhurst built a grand new country house of red brick beside the medieval castle. The Ashhurst family owned Hedingham for 250 years until Musette Majendie left it in her will to her cousin, Thomas Lindsay. 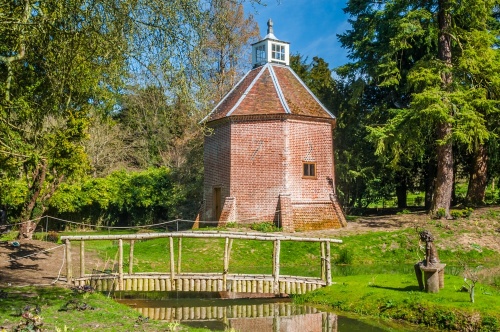 Part of the charm of Hedingham Castle is the delightful gardens that surround the castle and country house. When William Ashhurst built his Queen Anne house on the old castle earthworks, he called in designer Adam Holt, known for his garden at Wanstead Park, to create formal gardens on the sloping land below the house.

Holt transformed Norman fish ponds into a canal with a lovely octagonal folly feature and a formal lake. The landscape was carefully softened by planting carefully arranged clusters of specimen trees.

Large drifts of snowdrops were planted to create a colourful valley walk. In the 1920s the garden was extended to include a bog garden centred on a Georgian dovecote.

A more recent addition is a number of modern sculptures, scattered strategically throughout. The result is a gorgeous mix of formal and informal gardens surrounded by woodland.

I absolutely adored Hedingham. The location is utterly superb. The interior of the keep is in an astonishing state of good repair. I could almost imagine the great hall filled with medieval revellers, while musicians played from the gallery. And the gardens were an unexpected delight. Seeing the castle keep reflected in the lake is a marvellous sight.

Just to be picky let me note that the castle is properly called Hedingham Castle, while the village has the words the other way around and calls itself Castle Hedingham! 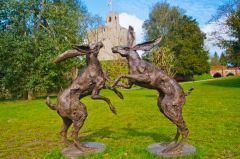 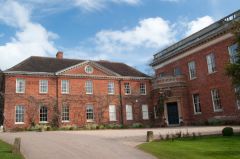 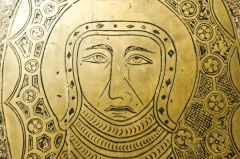 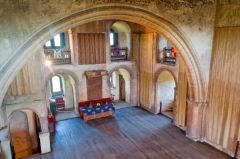 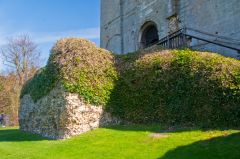 More self catering near Hedingham Castle

Self Catering near Castle Hedingham