HERITAGE HIGHLIGHTS:   15th century effigies of a knight and lady 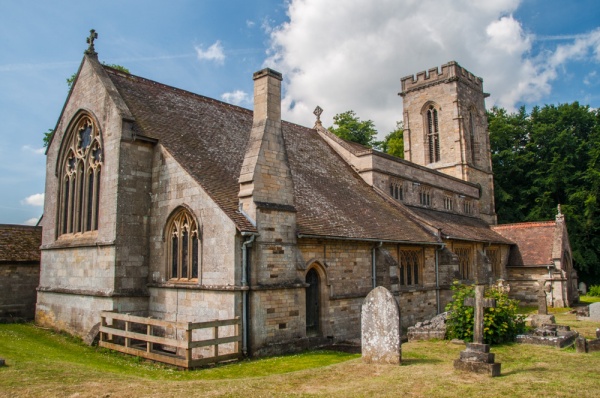 Holy Cross is an ancient medieval church beside the late 17th-century stately home of Burley-on-the-Hill Hall. The church is probably 13th century, if not earlier, but it was heavily restored in 1867 by JL Pearson.

Pearson was hired by George Henry Finch of Burley to restore the 13th-century building in memory of his wife Emily Eglantine. A memorial plaque is set into the chancel floor to commemorate the restoration. Finch may have thought the restoration was essential to the dignity of his own house, for several Victorian critics commented that the church was in poor repair and made a poor contrast with the grandeur of the neighbouring stately home.

Despite the Victorian style of the restoration, many features of the earlier medieval church remain more or less intact, including the lovely west tower. The north arcade dates to around 1180 and consists of large circular piers with simply carved capitals. The south arcade is 13th century, in Early English style.

There has been a church on this hilltop site since at least the 12th century, though the earliest written record comes from 1274 when the estate was owned by Nuneaton Nunnery. The village was much larger than it is today, but much of it was destroyed in a devastating fire in 1375.

The church is linked by a corridor to Burley (also known as Burley-on-the-Hill), a stately home built by the Earl of Nottingham in the 1690s on the site of an earlier mansion owned by the powerful Duke of Buckingham.

Buckingham's house was burned down during the turmoil of the English Civil War. The corridor linking the two buildings was erected in the 1790s and was restored during the Victorian rebuilding. The church was declared redundant in 1984 and four years later was taken into the care of the Churches Conservation Trust.

Perhaps the most interesting historical feature is the memorial by sculptor Sir Francis Chantrey to Lady Charlotte Finch (d. 1813), who was a close friend of Queen Charlotte and served as governess to the children of George III. Lady Charlotte's memorial was carved by Francis Chantrey, one of the most popular portrait sculptors in the Regency period. It shows her as a young woman, kneeling, draped in a classical gown. 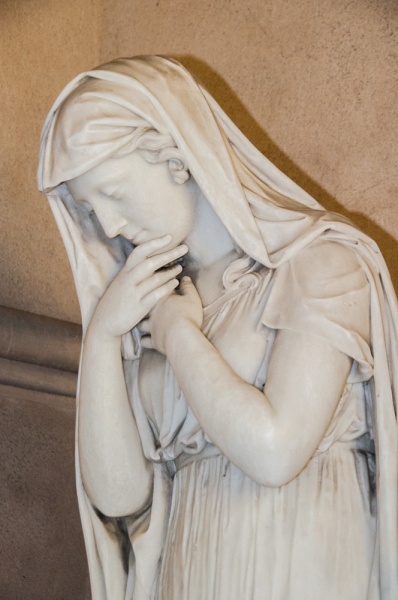 There is also a late 17th-century clock by Joseph Knibb, the most famous member of a well-known London firm of clockmakers. On the wall is a memorial to Catherine Giberne (d. 1781) in neo-classical style, and another to Anna Button (d. 1791). There is very good Victorian glass, most of it by the Westlake & Co. The large east window is by the famous firm of Clayton and Bell and was installed in memory of the 9th Earl of Winchelsea.

Near the door is a 15th-century octagonal font decorated with fine tracery patterns and small heads.

The only medieval tombs to escape the Victorian restoration are a pair of 15th-century effigies of an unknown knight and his lady. The effigies are carved from alabaster, and the knight's effigy is badly damaged.

Holy Cross is a delightful church to visit, and its location beside the historic manor house makes for an unforgettable scene of rural Egland.

NB. There seems to be some confusion over the dedication of this church. Several sources have it listed as All Saints, while the Churches Conservation Trust, who look after it, call it Holy Cross. 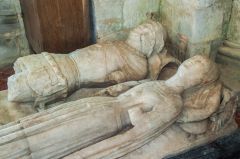 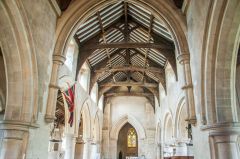 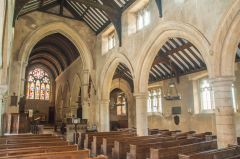