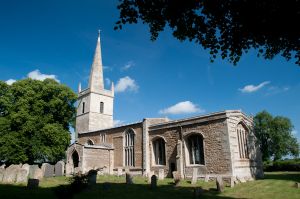 Wow! That was my insightful and erudite reaction as I came into the south porch of St Edmund's church at Egleton and saw the Norman south door and tympanum for the first time. Though smaller in scale than the celebrated chancel arch at Tickencote further to the north east, Egleton's Norman south door and chancel arch are superb examples of vigorous and vital Norman carving.

The doorway is supported on a pair of compound columns, decorated in unique patterned designs all the way from the floor to richly carved capitals. The hood moulding ends in two heads, one human and one a beast.

Above the doorway lintel is a large and beautifully carved tympanum, depicting two beasts, probably a dragon and lion, facing each other on either side of a wheeled geometric shape with six arms. The flanking corbels of the tympanum end in sculptures of a human and a grinning beast. The fine detail of the carving is superb; even the dragon's scales are carefully carved.

There seems to be some argument over the date of the south doorway. The church guide suggests 12th century, but Pevsner - who knows a thing or two about historic architecture - suggest that it is earlier, sometime in the transition between Saxon and Norman. It seems quite likely that it was assembled from pieces salvaged from a rebuilding of the church.

The detailed Norman carving continues inside the church. The chancel arch is again, superbly carved, with the carving looking as crisp and precise as if it had just been finished. There is one decorative column on each side, rising to a horizontal layer carved with geometric patterns.

Again, the designs on the columns are unique, rather than each echoing the other. That is one of the most impressive things about the Norman sculpture at Egleton - the sheer variety of it all!

The font is 12th century and is incised with cross symbols and rosettes. On one side is a plain Latin cross, the east side shows a more complex cross on a three-step plinth. The south face shows a six-leaved geometric shape very similar that on the tympanum. The final face has a much-damaged design which may be a head.

At the west end of the nave is a 15th-century rood screen, relocated from its traditional place between the nave and chancel. The screen has been partially restored and lowered from its original height. Nearby are several medieval pews with poppyhead carving decoration. Above the chancel arch is a royal arms, probably those of George III.

The structure of St Edmund's is primarily Norman. The north aisle was added in the 14th century, as was a clerestory and arcade, with the rather plain tower and south porch. The chancel itself was rebuilt in the 15th century.