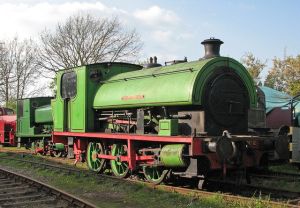 The museum has a large collection of historic railway vehicles, many of them driven by steam. Included in the collection are coaches, vans, wagons, and locomotives (both steam and diesel driven).

There are also a large number of artefacts connected with railways in the Rutland area. Most of the collection is displayed in the open air. There is a 3/4 mile demonstration line, and a section of the old Oakham Canal to see. See engines being repaired in the restoration shed, and see a rebuilt engine shed from the old quarry at Woolsthorpe.

The museum site was originally used as a loading station for local ironstone, which was brought to the site in lorries and tipped into the railway wagons from a specially constructed tipping dock, which is still standing.

The museum is open most weekends. Admission is free as of this writing but donations are requested. There is a visitor centre with a souvenir shop.

Nearest Accommodation to Rocks by Rail: The Living Ironstone Museum:

More self catering near Rocks by Rail: The Living Ironstone Museum >>

More Hotels near Rocks by Rail: The Living Ironstone Museum >>

More bed and breakfasts near Rocks by Rail: The Living Ironstone Museum >>