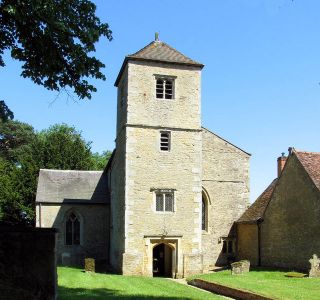 Chetwode, St Mary & St Nicholas
In 1244 Sir Ralphe de Norwich founded an Augustinian priory at Chetwode, four miles from Buckingham. At that time there was already a parish church here, dedicated to St Martin, though there was not much in the way of a village beyond a few scattered farms.

The church is composed of just a nave, chancel, west tower, and north chapel. The exterior is humble, even plain, but the interior is a delightful mix of medieval features with later Elizabethan and 17th-century furnishings.

The core of the architecture is superb Early English work, particularly the three sets of stepped lancets in the chancel. Also in the chancel is a linked sedilia and piscina, ornamented by Norman-style dogtooth moulding. In an interesting twist, the central arch of the sedilia has been converted into a doorway.

The north chapel was converted in the 17th century into the manor pew, with wooden panelling and a fireplace to keep the squire's family warm through the coldest sermons!

Perhaps the best feature at Chetwode is the medieval stained glass. There are fragments of 13th and 14th-century glass in the chancel and under the tower. There is also a painted wooden triptych dated to 1696, and near the organ is a grave slab from c. 1350, carved with a foliated cross.

The Angel Restaurant with Rooms - 14 miles
Aylesbury, Buckinghamshire
Stay from: £70.00