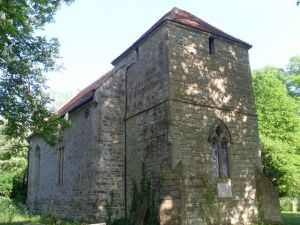 Water Stratford, St Giles Church
A much-restored Norman church boasting a pair of reused 12th-century doorways. We don't know precisely when the Norman church was erected, but a date around 1150 seems likely.

That early church was composed of just a chancel and nave. Sometime around 1350 a west tower was added. In 1828 the entire church was rebuilt, but thankfully many of the original medieval features were reused in constructing the new building.

Among the Norman features are the two doorways, each with a carved tympanum. The tympanum over the south doorway is carved with a figure of Christ in Majesty. To the sides are two pillars with finely carved capitals.

The north chancel doorway has a tympanum carved with diaper decoration with a carving usually described as an Agnus Dei, or lamb and cross. An alternative explanation is that the carving represents the Holy Hind of St Gregory. The lintel is carved with a pair of fighting dragons in Saxon style.

There is a touching 17th-century memorial in the nave to Mary Franckyshe (d. 1630) of Water Stratford Manor, who died in childbirth. The deceased is shown lying in bed, with her large family looking on, and an infant in a cot nearby.

The chancel arch is in Early English style and probably dates to the 13th century. on the north side of the arch is a recessed squint, with wooden shutters.

In the churchyard is a gravestone to Rev Joseph Bosworth, a prominent Anglo-Saxon scholar, who served as rector at Water Stratford. Also in the churchyard, though in an unknown location, is buried Rev John Mason (d. 1694), an influential 17th-century writer of hymns.

His most well-known hymn, 'How shall I sing that majesty', may have been inspired by the tympanum of Christ in Majesty over the north door. A memorial to Rev Mason is set against the west wall.