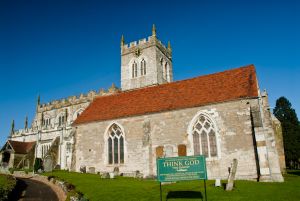 The history of St Peter's church at Wootton Wawen stretches back into the dim reaches of the Dark Ages when the area was first converted to Christianity by St Cedd and St Chad. At that time the region was settled by the Hwicce, a client kingdom of Mercia.

Sometime between 723 and 736, Aethelbald, King of Mercia, granted Aethelric of the Hwicce 2000 acres of land to support a monastic settlement of Benedictine monks at 'Wudu Tun'.

We are fortunate in that the actual charter still exists, but it does raise the question of whether Aethelbald was referring to an already established minster at Wootton, or simply granting the right to build a new minster. Whatever the case, we know that by the mid 9th century there was a stone minster church here, surrounded by a thriving monastic community.

By the early Norman period, the Saxon monastery was gone, and the church was rededicated to St Peter. The Norman Robert de Tosny, Earl of Stafford, gave the church to his family abbey of Conches in Normandy. In the 1130s a small priory was built opposite the church, operated by a prior and a single monk from Conches. The priory was responsible for building the massive chancel of St Peter's, to act as their chapel.

In 1443 Henry VI confiscated the priory at Wootton and transferred the church to his newly established King's College at Cambridge. Under the ownership of King's College, the church at Wootton was extended and expanded to become the wonderful building can see today.

It is hard to know where to start to outline the historic treasures of this delightful church. At the core of the building is the old Saxon sanctuary. The sanctuary links the nave to the chancel and has a further Saxon doorway to the south aisle, where you will find the chained library. 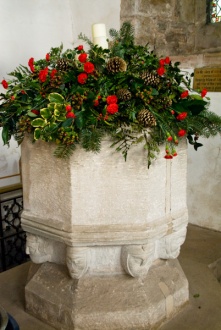 On one side of the passage from south aisle to the chancel is a long wooden case containing a chained library, donated by a former vicar, Rev George Dunscombe, who served from 1642-1652. There are 9 volumes in the library from the 16th and 17th centuries. Among the items in the library are a 'Breeches Bible', and Calvin's 'Institution of Christian Religion'. In the chancel is a separate case displaying an early 'Black Letter Bible' (i.e. using Gothic script).

In the nave is a quite superb 15th-century oak pulpit, carved with delicate tracery panels. Near the south door is an extremely large royal coat of arms to George I, and almost underneath it stands the 14th-century octagonal font. Though the bowl is extremely simple, the underside is carved with wonderfully expressive human faces, some of which may depict the monks of Wootton priory.

In the west wall is a late Saxon or early Norman door, now blocked, flanked by 18th-century fluted wooden columns which once supported a west gallery. Above the door is a magnificent Perpendicular style west window. On either side of the window is a projecting carved head. These are 14th century, and depict Edward III and Queen Phillipa.

A small Saxon window is set in the north wall, near a brass plaque to William Somerville (1682-1742), squire of Edstone Hall, known as the hunting squire poet. To the east of Somerville's plaque is a large 13th-century window retaining some of its original glass. The east end of the nave is taken up with lovely 15th-century parclose screens, which originally surrounded chantry chapels.

In the chancel and Lady Chapel beyond are a wealth of historic monuments. I'll mention just a few highlights:

Taking up the entire north-east wall of is a wonderful altar tomb of Francis Smith (d. 1605) depicting the bearded figure of the deceased in a reclining state. Against the south wall is a huge marble monument erected by Sir Robert Knight to his children. Knight's own tomb is hidden by a fanciful marble plinth and urn at the east end. Knight was the cashier of the ill-fated South Sea Company, the government-financed fraud that became known as the 'South Sea Bubble'. 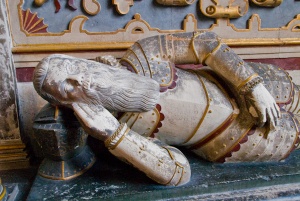 High on the south wall above, are clear remnants of 14th-century wall paintings, depicting the lives of Saints, the Seven Deadly Sins, and the Passion of Christ. At the base of the south wall is a superbly carved 15th-century piscina topped by a fanciful vaulted canopy.

On the opposite side of the east window is the mechanism of an early 18th-century turret clock. At the west end of the Lady Chapel is a wonderfully preserved 13th-century wooden chest, used for storing parish documents.

In the chancel is a chest tomb of John Harewell (d. 1428), with a quite beautifully carved alabaster effigy. Harewell's head rests on his helmet, and his feet rest on a small dog. The tomb is carved with a rebus (symbolic pun) on his name, with a heraldic shield depicting a hare.

On a raised dais at the east end of the chancel is a table tomb to a later John Harewell (d. 1505), great-great-grandson of the first John. In the surface of the tomb is set a series of wonderfully detailed brasses showing the deceased, his wife Anna, and their numerous children.

These are just the highlights of what is a marvellous historic church - it is hard to do it justice in this short guide.

NB. The excellent church guide, 'The Saxon Sanctuary' outlines the history of the area, and contains a suggested local walk taking in the historic highlights of Wootton - of which there are many!

The Bell At Tanworth - 5 miles
Tanworth-in-Arden, Warwickshire
From: £42.50