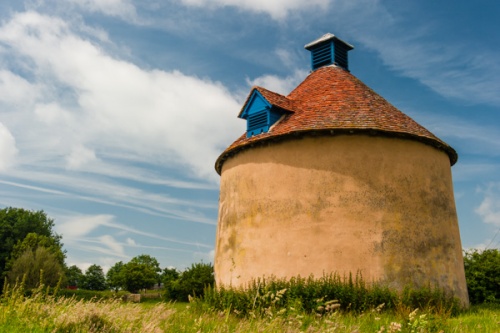 A striking circular dovecote, dating to the 14th century. Kinwarton is one of a very few circular dovecotes in England, and a very fine example. It was originally part of a moated grange belonging to Evesham Abbey, but it is now the only remaining relic from the grange. We do know that a certain Robert Green gifted a dovecote to Abbot William de Boys of Evesham, but we do not know for certain that this is the same dovecote.

The walls of the dovecote are more than three feet thick. It is built of rubble with plaster rendering. The interior is lined with over 580 nesting boxes arranged in 17 layers, which were reached by a rare 'potence'; a ladder which is made to pivot around a central post.

The dovecote is signposted off the B4089 immediately northeast of Alcester. The minor road off the B4089 splits after a short distance and it isn't immediately obvious which way to take. By luck, we chose the left fork and this proved to be correct.

The road is extremely bumpy and potholed, so go slowly; you pass by the church on your right then after a hundred yards the road ends at a farm fence and the dovecote is visible in the field beyond.

It won't take long to visit - even if you are a dovecote enthusiast, but that's not to say it is without interest! The structure of the dovecote is very striking; for a start, it is quite unusual to see conical dovecotes in England.

A visit to Kinwarton can easily be combined with a trip to popular Coughton Court nearby. 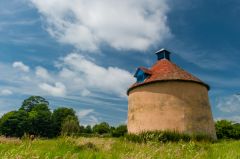 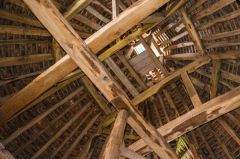 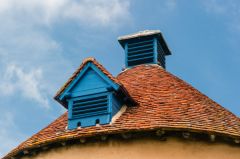 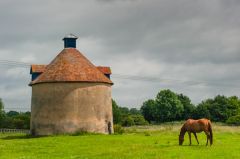 More self catering near Kinwarton Dovecote >>