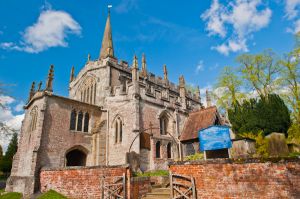 Nikolaus Pevsner, in his 2003 book 'The Buildings of Britain', called St Mary's church in Lapworth 'A splendid looking church'. He was right. The first stone church here dates to the first part of the 12th century, though there may have been an earlier wooden church here in the Saxon period.

Certainly, the church was erected before 1190, when historical records indicate a rector here. Around 1200 a chapel was built against the south wall. This chapel, dedicated to St James, evolved into the current south aisle. Around 1250 a grand west porch was begun.

This is one of the most noticeable features of St Mary's. The porch was intended to house a grand west entrance, but it was never finished. Instead, what you have is a passage straight through the porch, with a small chamber above. This chamber was used to store holy relics until in 1373 it was turned into a chantry chapel.

At the north side of the chancel is a Lady Chapel, built around 1250. In 1466 this was turned into a chantry chapel for the Catesby family. The Catesby's were later heavily involved in the Gunpowder Plot. A much-worn table tomb for members of the family stands outside the south porch.

In the late 15th century the nave roof was raised and clerestory windows inserted. This gives the interior of St Mary's a wonderfully light and spacious feel. The clerestory windows retain their original clear glass. At the same time, the wonderful timber roof of the nave was added.

But we still haven't mentioned the most unusual feature of Lapworth church; the detached tower. This was built to the north of the nave in the 14th century. The spire was added later, and it was not for another 400 years that a connecting passage was built to join the tower to the body of the church. High up on the tower is an early 16th-century clock, one of the earliest in Warwickshire.

Also on the exterior of the south wall are three scratch dials. On the south wall is a 13th-century priest's door, now blocked up. On the north wall of the tower are a series of fine grooves, probably made by soldier's sharpening their blades.

St Mary's is a delightful church, with an interesting mix of medieval styles. I would be remiss if I did not mention one disappointing feature - the church is alarmed, presumably for good reason, but that means that some areas, like the chancel, are off-limits to casual visitors. That does detract slightly from a visitor's ability to explore and enjoy what is otherwise a very intriguing historic building. 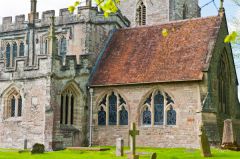 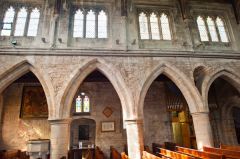 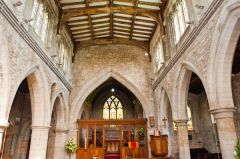 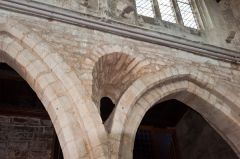 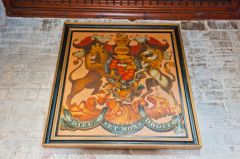