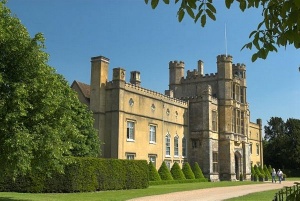 Coughton Court is a lovely Tudor house, home of the Throckmorton family since 1409. Coughton features a half-timbered courtyard, an impressive gatehouse, and no less than two churches. The Throckmortons were heavily involved in the Gunpowder Plot, and a compelling exhibit in the house outlines the story of the plot and its impact on the family.

Coughton Court is largely Tudor, with Jacobean additions. The house was begun around 1530 by the Throckmorton family, on the site of an earlier and has been occupied by the Throckmortons ever since. The most striking feature is the impressive battlemented gatehouse, which must be one of the finest in England.

To either side of the gatehouse are two wings which bend around to the rear to form an unenclosed courtyard. There was originally a fourth wing, completing the courtyard square, but this wing was destroyed in 1688 by an angry mob of locals who objected to the existence of a Catholic chapel there.

The courtyard features some superlative Elizabethan half-timbering. From the courtyard, a knot garden leads onto formal lawns and parkland. The interior features excellent collections of family portraits, porcelain, and fine furniture.

Among the items on display is a cope embroidered by Katherine of Aragon, and the chemise worn by Mary, Queen of Scots to her execution. On a less solemn note, you can view the Throckmorton Coat. This intriguing garment was made in a single day, from shearing the wool from the sheep in the morning, to carding and spinning, and finally tailoring the cloth to produce the finished coat by evening. 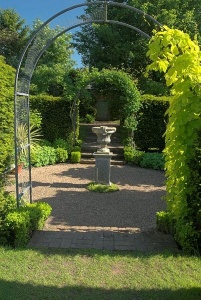 The Throckmortons had great influence in the Tudor court, but after the Reformation, their influence waned, due to their refusal to abandon the Catholic faith in favour of Protestantism. There are several mementoes on display from this period, and visitors can view the secret chamber, or priest's hole, used to hide Catholic clergy at Coughton.

Following the eventual introduction of 'Catholic Emancipation', the very first Catholic MP to sit in the House of Commons was a member of the Throckmortons of Coughton Court.

In 1605 a group of Catholic militants plotted to kill King James and put a more favourable Catholic monarch in his place. See our article on the Gunpowder Plot for full details. An exhibition in the Tower Room tells what led the Throckmortons to become involved in the plot, and how its eventual failure affected the family.

Coughton suffered badly during the Civil War. The Throckmortons supported the Royalist cause, and thus found Coughton Court the subject of a Parliamentary attack. The house was captured, and sacked by Parliamentary troops, leaving much repair work to be done.

The National Trust garden consists of a formal lawn and topiary hedges, with arched walkways, informal parkland and woodland areas, a lovely riverside walk beside the River Arrow, a bog garden, a traditional English kitchen garden, orchard, and a lake with an attractive Victorian summerhouse.

Coughton is unusual in that there are two churches set beside the manor. The closest church is the older, the parish church of St Peter, rebuilt around 1450 by Robert Throckmorton. After the Reformation, St Peter's became an Anglican church, and the staunchly Catholic Throckmortons eventually erected the private Catholic church of St Peter, St Paul and St Elizabeth in 1855, close to the older establishment. 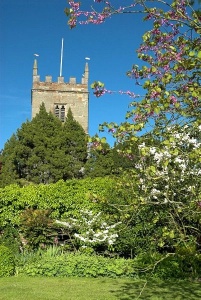 The National Trust has interesting quizzes available to help children enjoy the house. Our children, ages 5 and 11, enjoyed seeing the secret priest's hole, and this provided an opportunity to provide a painless history lesson about the Reformation.

The Victorian gazebo also proved a big hit, as did the fact that we could climb to the top of the Tower and step out onto the roof for superb views over the rooftops of Coughton Court and the countryside beyond.

What you will see: 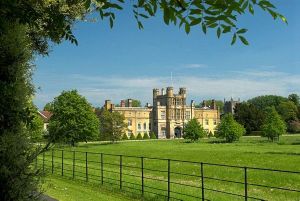 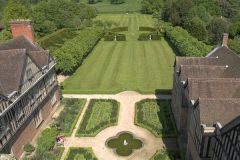 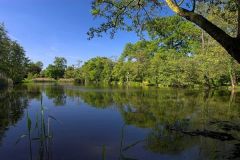 More self catering near Coughton Court