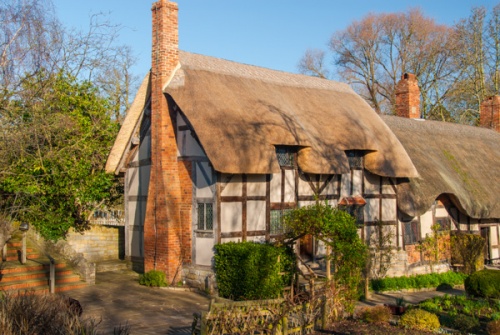 The hamlet of Shottery is now almost part of Stratford upon Avon, but in Elizabethan times it was a completely separate village. Footpaths lead from central Stratford to Shottery, perhaps following in the footsteps of Willliam Shakespeare himself, who came to Shottery to court his future wife, Anne Hathaway.

The small thatched cottage that was Anne's home before her marriage has been preserved as it was in her childhood. Say the words 'English cottage' and most people would conjure up an image of a thatched roof, timber-framed dwelling with a bit of garden in front, a picture of timeless England if ever there was one. A cottage like this one.

Though Anne Hathaway's cottage is quite a bit more than the cramped, old fashioned house you might imagine; it stretches to 12 rooms, leaving us to deduce that Anne's family were extremely well-off by the standards of the Elizabethan period. A lovely garden stands before the cottage door, featuring plants known to have been used in Shakespeare's time. 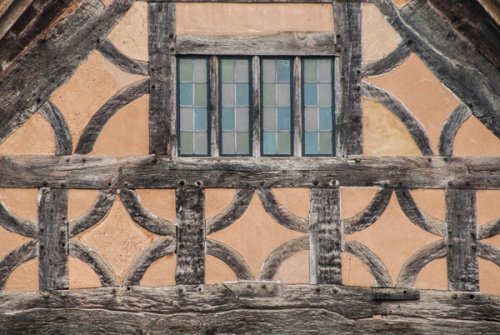 Ornate timber-framing under the eaves

The house is built on sloping ground, with the result that the interior has floors at several levels, making progress through the building a bit of a chore. The house probably began at least as early as the 14th century, though much of what we can see today dates from the 16th.

The house has been furnished in the style of the Elizabethan period, using original furniture and household implements wherever possible. In an upstairs bedroom is a wooden bedstead said to be the very bed upon which Anne Hathaway was born. Another piece of furniture believed to be original is the settle beside the main fireplace, upon which William Shakespeare is believed to have courted Anne.

The cottage stayed in the hands of the Hathaway family until 1892 when it was purchased by the Shakespeare's Birthplace Trust so that it could be preserved. 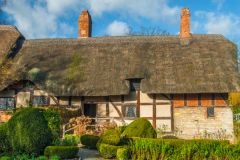 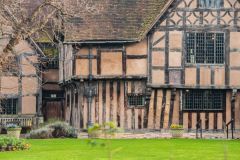 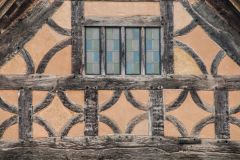 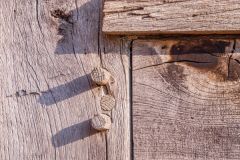