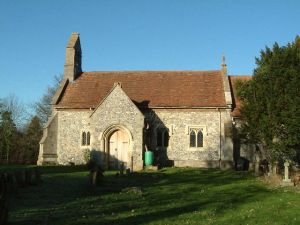 Little Kimble, All Saints Church
A delightful church just north of Princes Risborough, famous for its series of exceptional early 14th-century wall paintings. The church itself is very small and consists of only a nave and chancel with a small west double bellcote and a south porch. It dates to the 13th century or earlier.

There are little more than traces of paintings in the chancel, but the nave is wonderfully painted on all four walls. The paintings are in four courses. The top course is only about two feet high and has a zigzag bottom border. Little of the subject matter can be discerned.

The second section from the top is the largest, about seven feet high. This is primarily painted with figures of various saints. The third course from the top is about 6 feet high, leaving only a short course near the floor. Almost nothing of this lowest section has survived.

Of the paintings, there are three which deserve special mention. There is a very large figure of St George, though nothing now remains of the dragon he has just conquered. Beside the saint is the figure of the princess he has recused from the dragon.

A second painting shows the burial of St Catherine, with angels laying the saint to rest on Mount Sinai. A third painting, to the right of the south door, shows a hooded figure holding a book. This is probably meant to represent St Bernard holding the Book of Rule of his Order.

Beyond these three there are a number of other fragmentary paintings in a state of varying repair. The best of these decorate the north wall. Among the paintings are the life and martyrdom of St Margaret, and images of St Clare, St Francis, St Lawrence, and a Virgin and Child.

Taken as a whole, the wall paintings at Little Kimble are an extraordinary medieval treasure, one well worth seeing.

There is more to see beyond the paintings, including six painted 13th-century floor tiles in the floor of the chancel. The tiles include depictions of a mounted knight, knights in combat, and a king with a dog. There are also fragments of medieval glass, including some with heraldic symbols.

More self catering near Little Kimble, All Saints Church >>

The Angel Restaurant with Rooms - 8.7 miles
Aylesbury, Buckinghamshire
Stay from: £70.00

More bed and breakfasts near Little Kimble, All Saints Church >>