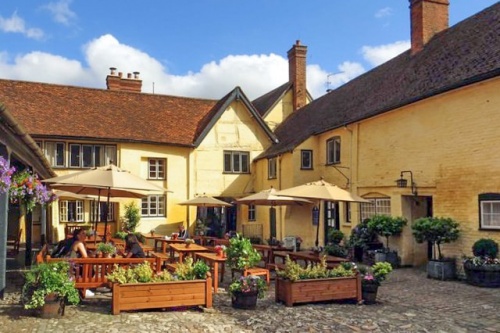 The King's Head Hotel is a historic coaching inn standing just off the market square in Aylesbury. The oldest part of the attractive, timber-framed building is the cellar, which dates to the 13th century and may have belonged to a nearby friary. Above ground, much of the building is 15th century.

The first written record of the King's Head comes from 1455, when Ralph Verney, a master mercer from London, purchased the property from a wool merchant named William Wandsworth.

The Verney family seat was at Claydon House, and in the 1470s they built the Great Hall to act as a guest house. The hall could have been no more than a decade old when Henry VI and Queen Margaret stayed here while on a royal tour of the kingdom; what we today would call a honeymoon.

The royal visit is commemorated in the stained glass of the mullioned front window. The window was not built for the King's Head but was brought here from Greyfriars monastery. 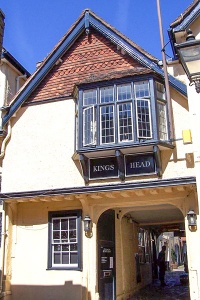 Another royal visitor stayed here in the early 16th century; Henry VIII is said to have visited the King's Head while he was wooing Anne Boleyn.

The Verney's hall was converted to serve as a coaching inn by the 17th century. You can still see the stones set on either side of the coach gateways to align the wheels for entering the inner courtyard. The cobbled courtyard itself dates to the early 14th century and served as the original market place for Aylesbury.

In the late 17th century the King's Head served as a postal delivery point. Riders on horseback would drop letters through a hatch, into a room called The Glue Pot, where the post was sorted and stamped.

Aylesbury came out strongly for Parliament in the Civil War. Oliver Cromwell is believed to have used the inn as a base of operations when he came to Aylesbury in 1650, though there is no conclusive evidence of the link. Another tenuous Civil War story suggests that there are a series of underground tunnels linking the King's Head to nearby buildings, including churches.

The tunnels are said to have been established as an escape route for Parliamentary troops should Aylesbury be captured by Royalists. Again, there is no solid evidence of any system of underground passages.

Following the Civil War, the inn took to minting its own trade tokens, since money was in short supply. Replicas of the tokens are on display.

Ghosts at the King's Head

The most interesting part of the building for visitors is the hall, with its wattle and daub construction. Look for a Tavern clock, a reminder of the late 18th and early 19th century when there was a tax on clocks and watches, so prudent people used clocks in public places like a tavern to keep track of time.

The Gatehouse Chamber is a very grand room on the first floor. It was used by the Assize Courts in the 17th century, and among the judges who presided over court cases here was the infamous 'hanging judge', Judge George Jeffreys.

Look for the medieval fireplace, moved the Gatehouse Chamber from the Great Hall. It is carved with initials of Parliamentary troops stationed in Aylesbury during the Civil War. The room has a decorative ceiling in Tudor style, created when the wealthy de Rothschild family had the inn remodelled in the 1880s.

The Solar Room, directly over the Great Hall, is the chamber thought to have been used by Henry VIII in 1533, and possibly by Oliver Cromwell in 1651. Linked to the room is a secret priest's hole. When the secret chamber was opened in the 20th century it was found to contain a number of swords and flintlock pistols, presumably left by Roundhead soldiers.

The King's Head is not simply a historic building; it is actually a fully-fledged pub, with part of the building occupied by a bar run by a local Chiltern brewery. There is a large cobbled yard in the courtyard of the inn, which has recently undergone extensive restoration, and visitors can enjoy refreshments in the restaurant.

The Angel Restaurant with Rooms - 8.6 miles
Aylesbury, Buckinghamshire
Stay from: £70.00