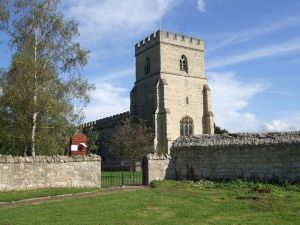 Dinton, St Peter & St Paul Church
An appealing medieval church with Norman roots. Much of the current building is 13th and 14th century, but there are some extremely appealing Norman elements still left to see. There was a church on this site at least as early as 1140, but the chancel was extended in 1230, a south aisle and arcade added around 1240, and a south porch in the late 15th century.

The most interesting feature of Dinton church is the south doorway, a survivor of the 12th-century church. The doorway is a superb example of Romanesque sculpture. It is arranged in three orders, each carved with complex designs including a row of hearts, foliage, beading, a bird and a strange beast.

Above the doorway is a squared-off lintel, which is carved with a likeness of a winged St Michael and a dragon, and inscribed with the words '+PREMIA PRO MERITIS SI QIS DESPET HABENDA AVDIAT HIC PREEPTA SIBIQVE SIT RETINENDA+' which loosely translates as "If one despairs of having rewards for his merits, Let this man hear the advice and let it be retained by him."

This is probably a reminder to 12th-century churchgoers that remission of worldly sins can only be achieved through the sacraments of the church.

Above the lintel is a quite wonderful Romanesque tympanum, carved with a magnificent Tree of Life at the centre. A peculiar beast stands on each side of the tree, rearing up to grasp a bit of fruit from the tree branches in its mouth. The quality of the carving is breathtaking, even after the passage of so many years.

Within the church is another 12th-century treasure; the font, which may have been recut in the 14th century. This is shaped like a stubby chalice, with a beautifully scalloped bowl with a row of quatrefoils beneath the rim.

The Angel Restaurant with Rooms - 5 miles
Aylesbury, Buckinghamshire
Stay from: £70.00