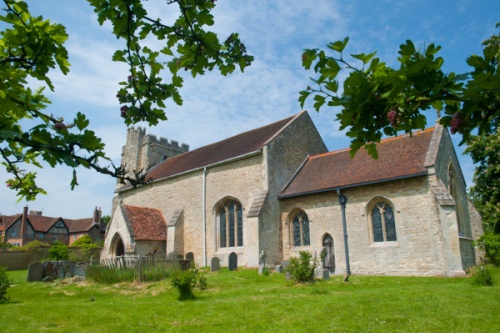 Set in idyllic countryside in the heart of the Vale of Aylesbury, St Nicholas church stands n a tranquil village setting near a historic Tudor manor house.

There has been a church here at least as far back as the 11th century when the manor belonged to Queen Edyth, wife of Edward the Confessor. After the Norman Conquest, the manor was held by Walter Gifford, but after Walter died the estate was claimed by his sons and by the monks of nearby Notley Abbey. 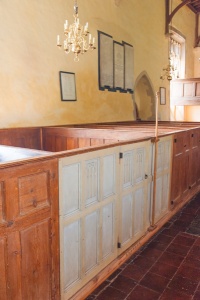 The church was reduced to the status of a chapel of ease in 1182, and the estate became an abbey grange. The monks from Notley who worked the farm are thought to have lived at Langlands Cottage, which still stands within the village. In 1483 St Nicholas became a parish church in its own right.

The church we see today is early 13th century, but there are ancient stones in the lower sections of the tower which come from a Saxon building. The interior has remained remarkably unchanged since the 18th century.

The Church with No Roof

In the 18th century the medieval pitched roof was replaced with a very narrow-pitched lead roof. This left the gables much higher than the new roof level. From a distance this left the church looking as if its roof had disappeared, a victim of time and neglect. For this reason, it acquired the unfortunate moniker, 'The Church with no Roof'.

By 1975 the lead roof had become unsafe and was replaced, with the new roof at the original pitch. While you are looking up at the roof, notice the clock. This was a bequest from Jane Beresford of Nether Winchendon House and was installed in 1772. The clock itself is earlier and is one of only a half dozen early 17th-century church clocks still in use throughout England.

Scratched onto the surface of a buttress on the exterior of the chancel are three mass dials. These rudimentary sundials were used to tell the time of the next service. 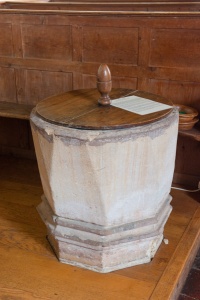 The nave is filled with high-sided box pews, leading to a large triple-decker pulpit dated to 1613. At the east end of the nave are several pews painted in delicate Strawberry Hill Gothic colours - very eye-catching in an environment of darkened wood. Several of the benches incorporate panels from a 16th-century wooden screen.

At the west end is a musicians gallery, and on the side of the gallery is a rustic royal coat of arms. The coat of arms shows the escutcheon of Hanover, so probably dates from the late Regency or the reign of George IV.

The chancel is primarily 14th century. Look at the chancel arch; on either side there are nine small pockmarks that might be a 16th-century child's game. On the north side of the chancel is a striking table tomb to Lieut-Colonel Francis Tyringham Higgins-Bernard, a 20th-century version of a medieval tomb, with a nicely crafted memorial brass set into the surface. 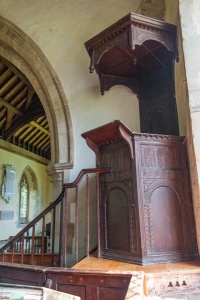 The highlight of St Nicholas is the stained glass. Over the gallery, in the south wall, is a 13th-century figure of St Peter. Opposite the pulpit is a pair of 14th-century roundels. These were taken from the church during the Civil War to avoid destruction, and hidden in Nether Winchendon House.

They were only returned to the church in 1958. In the north wall of the chancel is a panel showing the arms of Henry Stafford, Duke of Buckingham, inserted here in 1483. You'll notice the rising sun, indicating that the Duke supported the House of York in the Wars of the Roses.

On the south wall is a Flemish panel of glass from the 17th century. During the 17th century many Flemish nobles fled to England to escape religious persecution. They would often bring stained glass with them to prove their identity (think of it as an early form of identity card). Near the window with Flemish glass is another with the arms of important local families including the Barton, Tyringham, and Chetwynd families.

Other interesting historical features inside the church include the 15th-century octagonal font, with an octagonal bowl and a moulded base. In the chancel are several very nice medieval brasses.

One is to an unknown man in early 15th-century armour, another to a lady, also unknown, in a robe and head-dress of the same period. There is also a brass to John Barton (d. 1487) and his wife Margaret, plus grave slabs to members of the Tyringham family dating from the early 17th century.

On the wall is a very nice tablet to Francis Tyringham (d. 1684). Francis was married to Elizabeth Chelsham, of Kingston upon Thames, whose father John served as Clerk of the Jewel House for Charles I. 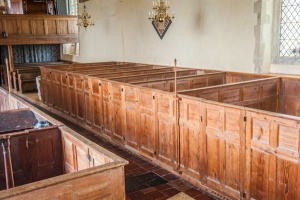 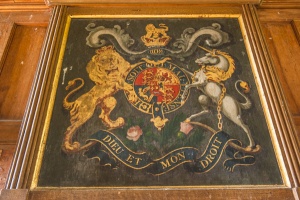 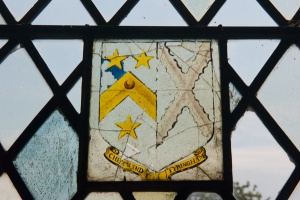 Chetwynd and Tyringham coats of arms 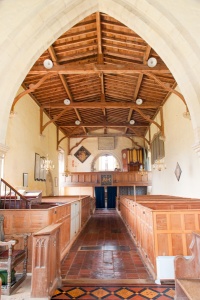 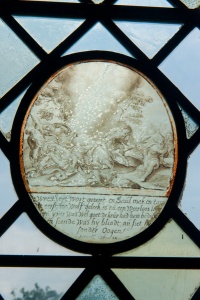 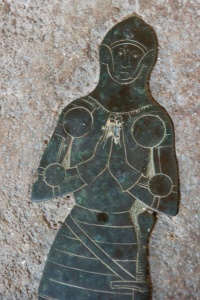 15th c brass of a knight

More self catering near Nether Winchendon

The Angel Restaurant with Rooms - 3.4 miles
Aylesbury, Buckinghamshire
Stay from: £70.00