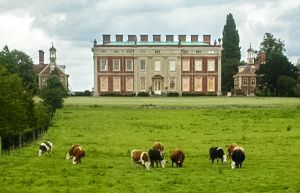 Wotton House
Extensive gardens surround the elegant manor of Wotton House, created in the mid-18th century by the Evelyn's, John and George. Wotton was the home of the powerful Grenville family as early as the 11th century. Around 1704 the current house was built in English Baroque style by Richard Grenville.

At the same time, the extensive grounds were laid out in a formal pattern, with a parterre and a double avenue of elm trees leading to a lake.

Later in the 18th century, the fashion for gardens changed into a more informal landscape gardening style, and the grounds were redesigned by Capability Brown and William Pitt, creating a pleasure ground stretching to 200 acres, centred on a pair of lakes linked by a canal.

The garden was dotted with classical temples, statues, and bridges in line with fashionable ideas at the time. Brown also worked at nearby Stowe House at the same time, when the Grenvilles owned both properties.

The house was badly damaged by fire in 1820, and the 2nd Marquess of Buckingham called in the famous London architect Sir John Soane to create new interiors in neo-classical style. Soane actually lowered the house, taking off the top floor to create a pleasing Georgian frontage.

The direct Grenville line died out and the house was sold several times. It was used as a boarding school for boys, but by 1957 it was in near-derelict condition and was scheduled for demolition. Then Elaine Brunner purchased the house and had the Soane interiors restored.

The nearby Coach House was also restored as a separate property, and it was later the home of actor Sir John Gielgud, who died here in 2000. The house was later purchased by ex-Prime Minister Tony Blair and his wife Cherie.

The house is normally closed to the public but the pleasure grounds are open on specified days throughout the summer months.

More self catering near Wotton House >>

The Angel Restaurant with Rooms - 4.4 miles
Aylesbury, Buckinghamshire
Stay from: £70.00