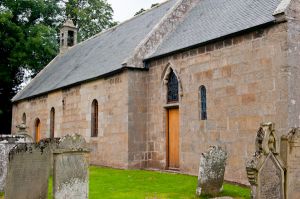 Birnie Church is one of the very few Norman churches in Scotland still in use for worship, and one of the best examples of Norman architecture in the country. The site has been used for worship since long before the current 12th-century building was erected, and was probably the site of an early Celtic church dating back to the 6th century.

The importance of Birnie as a place of worship is emphasized by the fact that it was used as the seat of the first four Bishops of Moray from 1107-1184 before the seat was permanently moved to Elgin. The fourth bishop, Simon de Tonei, was buried here in 1184, though no trace of his tomb can now be found.

When the bishopric was established in the late 12th century there was no permanent cathedral. Instead, the cathedral rotated between Birnie, Kinneddar, and Spynie churches, before it was finally moved to Elgin in 1322.

The fact that Birnie was chosen as a cathedral site indicates that it was regarded as an important place of worship before that time. Certainly, the presence of a Pictish stone in the churchyard suggests that it had been an important site for many centuries. But we'll come back to the Pictish stone in a moment.

The parish church at Birnie is widely regarded as one of the best examples of Norman church architecture in Scotland. That Norman influence is rather difficult to see from the outside; it is only when you walk into the simple interior that you start to see the Norman bones of the building. 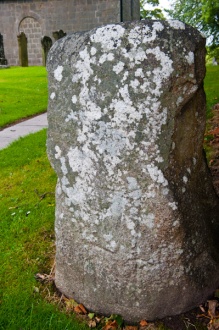 The most obvious example of this is the chancel arch, with its traditional rounded Norman arch, supported on wide half-pillars with carved capitals. Beside the arch is a simple stone font on a later pedestal base. The chancel, unusually, has no east window.

Within the chancel, set in a caged enclosure below the south window, is an ancient bell thought to be Celtic. This is roughly rectangular in shape and is made from two pieces of iron riveted together at the top. This is the Ronnel Bell (aka Celtic Saint's Bell) is a peculiar square-sided bell dating to the Celtic period. Tradition says that the bell was cast in Rome, and personally blessed by the Pope.

The church also possesses a 'Hairy Bible', a 17th-century Bible encased in undressed calfskin, to which the calf's hair still clings.

In the churchyard, by the gate that leads to the graveyard extension, is the Pictish carved stone mentioned earlier. For those of you who are technically inclined, the Birnie stone is a Class I boulder. It is decorated with an eagle, z-rod, and a notched rectangle, all traditional Pictish symbols.

The stone is very worn and covered with lichen so that the carvings are very hard to make out. Honestly, if you didn't know it was a Pictish stone, you'd be scratching your head wondering why someone had stuck an upright boulder by the cemetery gate.

When I left Birnie I initially felt disappointed. Buoyed by my research, which insisted that the kirk was one of the best examples of Norman architecture of any Scottish church, I arrived with great expectations. Certainly, the Norman chancel arch was interesting and is a very good example of the period. But there was little to excite my interest beyond that (though the Celtic bell was an unexpected find).

Then I realised that I've been spoiled by exploring English parish churches, where Norman work is quite commonplace. But church history in Scotland is quite different from that in England, and the Reformation resulted in many medieval and earlier Scottish churches being destroyed or heavily altered.

And maybe that's what makes Birnie important; Norman work north of the border is rare, and Birnie stands as one of the few examples of surviving Norman architecture in a parish church. For that reason alone it deserves attention! 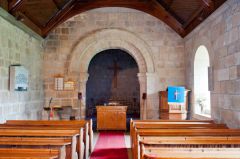 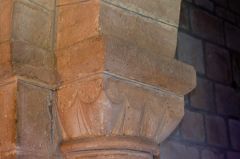 More self catering near Birnie Church >>