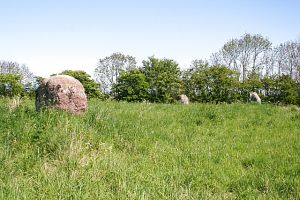 It is possible that the original stone circle was composed of 12 stones. Two fallen stones lie inside the circle, though these seem to have been moved here long after the circle was built.

It is possible that the original arrangement was a recumbent circle, from which the recumbent stone and flanking stones were later removed.

The stones range from 1m to 1.9m in height, and they appear to be arranged from lowest to highest from south to south-south-west. The westernmost stone bears cupmarks.

The circle was excavated in the Victorian period but no artefacts were found.

The circle can be found about one mile north of Urquhart at the edge of a farm field (north-west corner of the road junction).