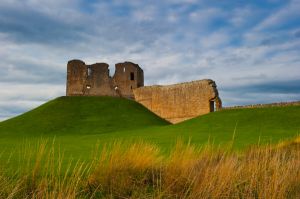 Duffus Castle is an almost perfect example of a Norman motte and bailey fortress. The castle was begun around 1150 by a Flemish knight named Freskin de Moravia, who came to Scotland during the reign of David I. The name was later transformed into the more familiar form, 'Moray'.

When the men of the region rose in rebellion against the king in 1130, David granted Freskin the estate of Duffus, on the edge of Spynie Loch, hoping that having a close ally in the region would help subdue Moray. Freskin responded by building one of the largest mottes in Scotland to control his new territory.

The motte was topped by a timber palisade, and at its foot was a larger enclosure called a bailey, where a range of timber buildings would have stood.

Freskin's son, William, adopted the title 'de Moravia' (of Moray). Within a few generations, the Moray family had become one of the most powerful and influential in the country.

In 1290 the English official sent to welcome Margaret, the Maid of Norway, stayed at Duffus Castle on their way north, and again on their way south without the hapless Maid, who had died on her journey to Scotland. It seems likely that the wooden castle was burned shortly after during the 1297 revolt of the Scots against Edward I of England.

In 1308 Robert Bruce burned Duffus as part of his efforts to unseat his great rival, John Comyn, Earl of Buchan. Sir Reginald Cheyne rebuilt the early timber structure in stone, and some of the material for the new fortress came from the royal forests of Darnaway.

The strongest part of the new castle was a two-storey stone keep, surrounded by a stone curtain wall. Unfortunately, the keep was not built upon strong foundations, and this fact would some become apparent!

Sometime before 1350 the castle passed to the Earl of Sutherland. Around this time the soft motte underpinnings gave way, and part of the stone keep slipped down the motte, where it lies today, canted at an absurd angle.

The most obvious part of this cockeyed structure is a garderobe bench, now slanting dramatically upwards on one side. One has to hope no-one was sitting down at the crucial moment when the motte gave way!

In the 14th century, the wooden defences were replaced by an imposing stone keep, rising to three storeys. A hall house and further stone domestic buildings were added after 1452 when the castle was sacked by the Earl of Moray during the Douglas revolt.

The site was then enclosed with a strong curtain wall. Much of the castle site is now in ruins, but the stone walls still stand to an impressive height.

Viscount Dundee (Bonnie Dundee) dined at Duffus in 1689 during his campaigns against William III. Some time shortly after Dundee's visit, the owner, the 2nd Lord Duffus, abandoned the castle for a new and far more comfortable residence at nearby Duffus House. The castle was left to decay and crumble into ruin.

But what a ruin! The conical motte still stands high above the moated site. At one end of the moat is a small, single arched medieval bridge leading to a cobbled path that takes visitors up the motte to the still substantial keep.

The curtain wall is still intact in many places, and there are substantial remains of storage buildings beside the keep. But the real reason for visiting Duffus is the motte itself, a marvellous example of early Norman style fortifications.

The shape of the mound is distinctive, giving rise to the oft-quoted remark that it rises clear of the ground 'like a boss on a buckler'. The site is set within a wide ditch that encloses a total area of about eight acres.

Just a short distance away in Duffus village is another Historic Scotland site, Duffus Kirk. 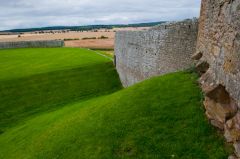 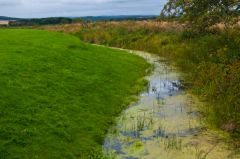 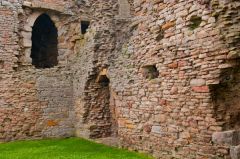 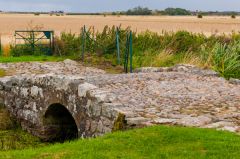 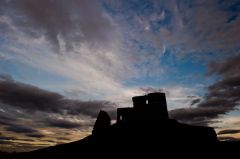 More self catering near Duffus Castle >>