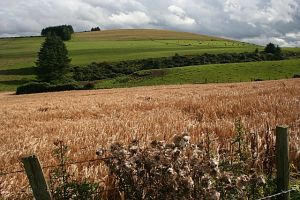 Logie Newton Cairns
There are three closely-spaced cairns situated in a wonderful position on the sloping side of Kirk Hill, above Logie Newton and the River Ythan. The cairns are built of quartzite blocks. The cairns are small, between 6 and 7 metres across - compare this to the large size of earlier cairns like Loanhead.

The quartzite blocks are very large, ranging up to 1.3 metes long.

Cairn A is the smallest at 5m in diameter, while Cairns B and C are 7.5m across. Cairn A has most of its kerb stones intact, though several lie within the circle. Cairn C is a turf-covered mound about 0.6m high.

The cairns have never been excavated but probably contain one or more burials.