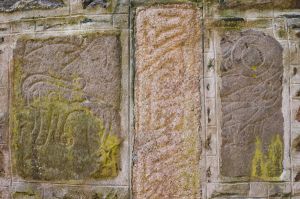 Built into the exterior wall of Fyvie church, below the east window, are four ancient carved stones. Two bear traditional Pictish symbols, including a crescent and v-rod, a beast that may represent an elephant, a mirror, and eagle, and a double disc.

A third, found at nearby Rothiebrisbane, is carved with a horseshoe and three circles within a disc. These three Pictish stones probably date to at least the 8th century, or perhaps earlier.

The fourth stone looks like part of a Celtic cross shaft; it is carved with intricate interlacing designs and circles and has been dated to between 1000 and 1400 AD. High above the east window in a small niche is a fifth stone, thought to be part of a finial from the medieval priory at Fyvie. The stones are in quite reasonable repair and the carvings are quite clear.

Fyvie church deserves a mention. There has been a church here since at least the 12th century when the living at Fyvie was granted to Arbroath Abbey. Little now remains of the medieval building, and the current church dates to 1808. By the churchyard entrance is a large burial enclosure with rather grand memorials to members of the Forbes and Leith families.

In the churchyard is the grave of Agnes Smith, immortalised in the old ballad 'Mill of Tifty's Annie'. The grave is marked by a Maltese Cross erected by public subscription in 1859 after the original grave marker had decayed.

Fyvie church is signposted from the centre of the village, off the B9005. There is a large parking area below the kirkyard.  A short walk from the kirk at Fyvie will bring you to Fyvie Castle, owned by the National Trust for Scotland, and the Loanhead Stone Circle is only five miles away. 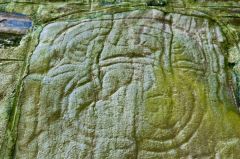 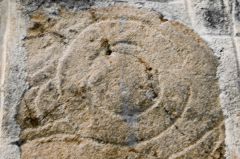 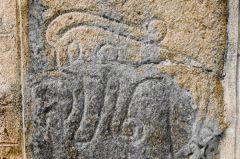