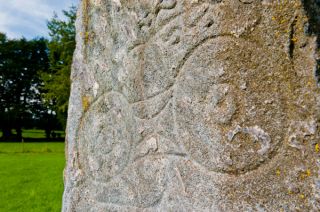 Picardy Symbol Stone is one of the oldest Pictish symbol stones in Scotland, dating to the 6th or 7th century. This beautifully carved stone stands in a farm field a few miles west of Inverurie. The stone is set over a small burial cairn dating to 1300-1500 years ago, which was found to have a grave recess beneath. Whether the stone is connected with the cairn burial is not certain. When the cairn was excavated a small pit was found on one side, probably dug for burial purposes.

This is actually rather unusual, as only a few carved stones are known to mark burial sites. It is possible of course that the stone was carved well before the burial, and simply reused as a convenient grave marker.

Unlike many carved Pictish stones, the Picardy Stone carvings are easy to decipher. At the top of the stone is a double disc and z-rod, above a serpent and z-rod. At the bottom is a mirror symbol. The double disc and z-rod is by far the easiest symbol to make out, but the serpent is also easy to see.

There are several other Pictish sites in the area, including another Pictish symbol stone at Inverurie (Brandsbutt), and the stone is within sight of the Iron Age hillfort and castle of Dunnideer.

Nestled at the bottom of a secluded driveway Letham House is located just outside the small market town of Haddington in East Lothian. This beautiful area is just a short … more >>