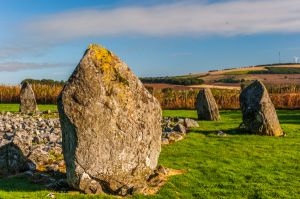 Loanhead is a fascinating prehistoric site, with a recumbent stone circle enclosing a ring cairn, believed to be 4000-5000 years old. Beside the circle is a later cremation cemetery.
This quiet hillside site above Oldmeldrum is home to one of the best-known recumbent stone circles in northern Scotland. The circle is composed of large upright stones with a huge recumbent slab flanked by pillars on the south-west side. The slab and pillars seem to be oriented to provide a view of the moon from the centre of the circle. The upright stones seem to be graded by height; they increase from the north-east towards the recumbent stone.

One of the flanking pillars shows a dozen cup marks, perhaps carved during ceremonial rites. The recumbent stone has been broken in two pieces, perhaps by the action of frost.

An investigation by archaeologists has found cremated remains at the base of the upright stones. The cremations seem to have been performed at the same time the circle was built.

Sometime later the interior of the circle was burned, then filled with a cairn of stones with a kerb of small boulders. More cremated remains were found under the cairn.

Near the stone circle and cairn is a small earthwork enclosure, constructed around 1500 BC. This enclosure seems to have used as a form of burial ground, with cremated remains of over 30 people discovered, and it remained in use until well into the Bronze Age, around 500 BC. Of the 32 total remains found, 8 were children, between the ages of 3 and 6. The ashes of some people were placed in urns, others were laid out in graves. One particular human remain stands out; it was a partially cremated body of a man, holding a stone pendant.

Loanhead is simply a superb site. The combination of the stone circle with its huge recumbent stone and the cremation cemetery make this a must-see if you are interested in ancient sites. Another impressive recumbent circle is at Easter Aquhorthies, also near Inverurie. 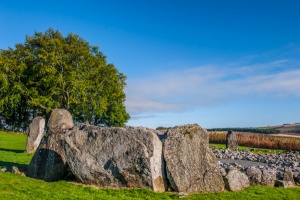 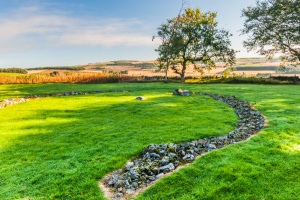 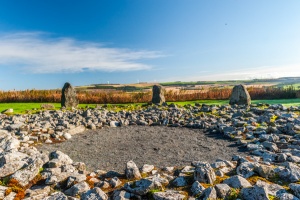 The centre of the burial cairn 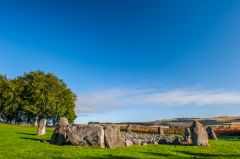 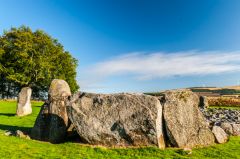 More self catering near Loanhead of Daviot Stone Circle >>

More bed and breakfasts near Loanhead of Daviot Stone Circle >>