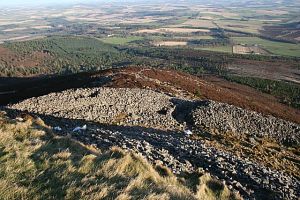 Mither Tap O'Bennachie
Mither Tap is the easternmost summit of the Bennachie massif. The bare granite top of the hill, which rises to 518 metres, is encircled by a low stone wall running about 30 metres below the summit.

The wall is ruinous in places, but once featured a parapet walk. There is an obvious entrance through the wall, protected by earthwork defences.

There is faint evidence of an inner wall, halfway between the outer wall and the summit. Both walls have collapsed and are no more than wide piles of scree.

Within the walls, excavations have revealed up to 10 hut formations.

There is no certainty when the fort was created. It is tempting to assign it to the Iron Age, but it could equally well be much later, perhaps as recent as the Dark Ages.

Leading from the fort is the 'Maiden Causeway', a paved road thought to link the fort to Maiden Castle. There are two branches of the road, one on the east side of the fort and one on the west. The two branches meet at the Nether Maiden, a small rock outcrop.