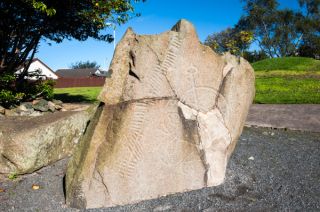 Brandsbutt Symbol Stone is an early Pictish symbol stone with an Ogham (ancient British and Irish alphabet of 20 symbols formed either side of or across a continuous line) inscription. The stone was broken up for use in repairing a nearby dyke, but has now been restored.
Many Pictish stones are hard to make out, but Brandsbutt Symbol Stone is one of the better-preserved stones in Grampian. The stone is set in a small green space of Gordon Crescent in Inverurie. It seems an odd place to find an ancient stone, surrounded by a modern housing estate!

What makes the Brandsbutt stone so interesting is that it is marked not only with traditional Pictish symbols but with a very clear example of Ogham script. Ogham was an ancient style of writing that used a series of parallel lines, grouped to form letters. The left side of the Brandsbutt stone is marked with Ogham script that translates as 'IRATADDOARENS'. This may link the stone with a local saint named Eddarrnon (Ethernanus).

The stone suffered indignity over the years; it was broken apart and used as part of a stone wall before the significance of the carvings was realised and the stone was reassembled and set up in its current location.

Next to the Brandsbutt Stone is a stone circle, dating to at least 1000 BCE. There were originally 12 or 13 stones in the circle, but there is nothing obvious remaining aside from marks on the grassy lawn. Some of the stones are built into the nearby drystone wall. In truth, if the presence of the stone circle wasn't mentioned in the Brandsbutt stone information plaque, I'd never have guessed it was there; it is that hard to make out.