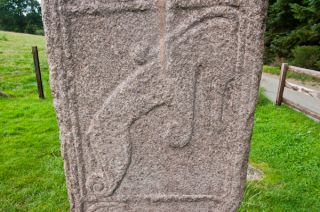 A Pictish cross-slab dating from the 9th century. The Maiden Stone is just over 3 metres tall and is of red granite. One side has a carved Celtic cross, atop which is a figure of a man between a pair of fish monsters. One interpretation suggests that the figure is Jonah escorted by a pair of whales. Below the cross-head are several sections of traditional interlace, key, and knot patterns. There are similar interlace designs on the narrow sides of the slab.
Where the first side is at least nominally Christian in symbolism, the reverse is strikingly Pictish. There are 4 panels, one above the other. From the bottom we see a mirror and comb, a beast, a notched rectangle and z-rod, and a number of animals. One of the animals may represent a centaur. The carvings are in relief, which indicates that they date from the late Pictish period. Earlier Pictish carvings are incised.

The Legend of the Maiden Stone
According to a local tale, a young woman of Drumdurno unwisely wagered with a stranger that she could bake a loaf of meal before he could build a road to the summit of Bennachie. Unknown to the maiden, the stranger was, in fact, the devil in disguise. He finished the road just before the loaf was done. The maiden fled from the devil, but he was about to catch her when she said a prayer, just as the devil touched her shoulder. She was instantly turned to stone, but the place where the devil's hand had touched her left a small cleft in the stone; that same cleft that we can see today in the Maiden Stone.

The Maiden Stone is one of the few cross slabs combined with Pictish symbols to be found in the Aberdeenshire area (others include the Dyce Symbol Stones). The stone is usually covered during the winter months to avoid frost damage. 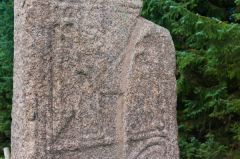 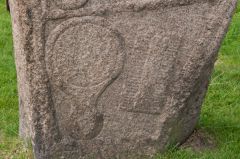 More self catering near Maiden Stone >>