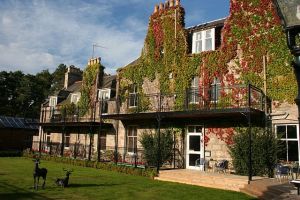 Loch Kinord Hotel, Dinnet
The village of Dinnet lies in the valley of the River Dee, in a broad low-lying area known as the Muir of Dinnet. The Muir is ringed with picturesque hills and dotted with lakes, the largest of which are Loch Kinord and Loch Davan, now at the centre of a national nature reserve.

As for the village itself, it came into existence at the coming of the railway in the Victorian period, but the area was made famous long before then, when the Battle of Culblean took place near here in 1335. The Earl of Atholl and his English army were beaten by Sir Andrew de Moray, the Warden of Scotland, a victory which marked the turning point of the Second Scottish War of Independence.

Southwest of Dinnet is the farm of Ballaterrach, where 8-year-old Lord Byron was brought to recover from a bout of scarlet fever. Byron became besotted with Mary Robertson, the farmer's daughter, and wrote a poem about her, a poem which also extolled the virtues of the Dinnet area. A short distance away is Blelach, where Charles Gordon raised the standard for Bonnie Prince Charlie's 1745 rising.

There are quite a few ancient sites in the area, including Tomnaverie Stone Circle, Kinord Cross, Old Kinord Ancient Village, and the Tullich Symbol Stone. An ancient crannog, or manmade island dating to the Bronze Age, stands in the centre of Loch Kinord. Also in Loch Kinord is Castle Island, where the crumbling remains of a medieval pele tower still stand.

About Dinnet
Address: Dinnet, Aberdeenshire, Scotland
Attraction Type: Village
Location: At the junction of the A97, A93, and B9158
Location map
OS: NO476988
Photo Credit: Anne Burgess, licensed for reuse under the Creative Commons Licence

More self catering near Dinnet >>

More bed and breakfasts near Dinnet >>