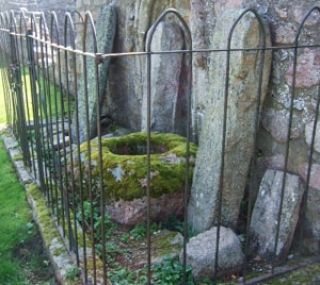 Tullich Symbol Stone
Outside the old ruined kirk of St Nathalan at Tullich is a worn Pictish stone carved with traditional Pictish symbols of a mirror, beast, double disc, and Z-rod. The stone can be found in a railed enclosure against the north wall of the church.

The stone's surface is very worn, and the edges have been trimmed at some point in the past. The symbol stone was discovered in 1866 by Rev John Michie of Dinnet being used as a lintel for a window in the north wall of the church.

The Tullich kirk site is bounded by a circular wall, suggesting a very early church existed on the site. It was thought to have been established by Nathalan, sometimes known as Neachtan, who died in AD 678. In the medieval period Tullich church was held by the Knights Templar, and after that Order was dissolved it passed to the Hospitallers. They built a fort around the church, traces of which could still be seen in 1898. Much of the present building is post-Reformation but a 14th-century doorway survives in the north wall.

Beside the symbol stone are 16 Celtic-style slabs stones inscribed with crosses. These are thought to be medieval gravestones and vary from 0.2m to 1.5m high. There is also a very large medieval font bowl.

There is a Pictish cross-slab five miles away at Kinord, and a stone circle at Tomnaverie, 9 miles away.

UPDATE
As of this writing, the symbol stone has been removed pending the construction of a display shelter in the kirkyard.

About Tullich Symbol Stone
Address: Tullich, Aberdeenshire, Scotland
Attraction Type: Prehistoric Site - Carved Stone
Location: On the south side of the A93 2 miles east of Ballater. There is a layby for parking.
Location map
OS: NO390975
Photo Credit: Stanley Howe, licensed for reuse under the Creative Commons Licence

Nestled at the bottom of a secluded driveway Letham House is located just outside the small market town of Haddington in East Lothian. This beautiful area is just a short …