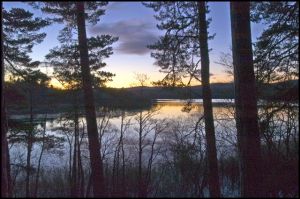 Old Kinord Ancient Village
The Aberdeenshire County Council calls Old Kinord a promontory fort, which is stretching things a bit, as there's no promontory to be seen. Rather, this ancient settlement, complete with hut circles and a carefully laid out field system, is set on a neck of land between Loch Davan and Loch Kinord and is part of the Muir of Dinnet National Nature Reserve.

The most obvious remains are the hut circles, composed of low stone wall enclosures in a round shape. Some have sunken interiors. There are souterrains (underground storage chambers) attached to some of the hut circles. There are low stone banks delineating field boundaries and spoil heaps of small stones. Stone dykes show where several ancient trackways ran.

The entire landscape in the Dinnet area is scattered with fascinating prehistoric and early historic sites. An early Christian cross stands on the north shore of Loch Kinord, only a short walk from the settlement site. In the middle of the loch, the smallest island you can see is actually a crannog, a manmade Iron Age island that is one of the very few in the north of Scotland.

A short walk to the north, across the Monandavan Burn, brings you to a medieval moated site (marked 'Homestead Moat' on OS maps. It's a good idea to bring an OS map (Landranger 37), because the hut circles at Old and New Kinord, and the cross slab, may take some finding.

About Old Kinord Ancient Village
Address: Kinord, Aberdeenshire, Scotland
Attraction Type: Prehistoric Site
Location: Off the A97 and B9119 onto a minor road to the the Dinnet Nature Reserve. Park at the nature reserve visitor parking area and walk to Kinord.
Location map
OS: NJ444002
Photo Credit: Phil Smith, licensed for reuse under the Creative Commons Licence