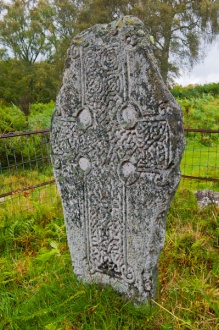 Kinord Cross is a beautifully carved cross slab which dates to the end of the Pictish era, most likely sometime in the 9th century. One side of the kite-shaped stone slab is carved with a relief of an ornate cross, filled with interlace designs.

The cross was once thought to be associated with the chapel of nearby Kinord Castle. In the late 19th century the cross was removed to Aboyne Park, but in 1959 it was returned to the shores of Loch Kinord, as near as could be determined to its original location.

The Kinord Cross is quite remarkable; the carving is beautifully crisp and clean, even after the passage of over 1000 years.

One thing that surprised me is that only the side facing the loch is carved. Many Pictish cross-slabs (for example, the famous one at Aberlemno church) have a decorated cross on one face and a deliciously pagan combination of Pictish symbols on the reverse face. Here there is only the cross, though it is indeed beautifully decorated with interlace patterns.

In the loch are two small islands; one is a purpose-built crannog, and the other holds the remains of an ancient castle (although to be fair, it is so overgrown with vegetation, you'd never know it).

The visitor centre at Burn O' Vat, on the B9119, has free map leaflets detailing a number of walks through the Muir of Dinnet nature reserve. Several of these walks take in the Kinord Cross. The most straightforward trail is the Little Ord trail, marked by a yellow Pictish carving symbol, and leads through very pleasant woodland, between Loch Kinord and Loch Davan, to the cross.

It should take 20 minutes or so if you simply walk there and back, but much longer if you take the full circular walk, which takes in ancient hut circles as well.

Please keep your eyes open if you are following the Little Ord trail! I was specifically looking for the Kinord Cross and I walked right past it. The cross is not signposted and it is easy enough to miss (unless it's just me).

Five miles away is Tomnaverie Stone Circle, while Culsh Earth-House is only seven miles away.

About Kinord Cross
Address: B9119, Kinord, Aberdeenshire, Scotland
Attraction Type: Prehistoric Site - Cross Slab
Location: On a track off the B9119 (off the A97) on the shores of Loch Kinord, in the Dinnet Nature Reserve. Park at the nature reserve visitor parking area at Burn O' Vat and walk.
Location map
OS: NO440997
Photo Credit: David Ross and Britain Express

More self catering near Kinord Cross >>