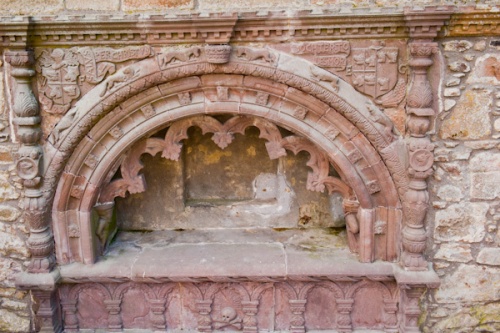 The old ruined kirk at Tarves is remarkable for the 16th-century altar tomb of William Forbes and his wife, Elizabeth Gordon, of Tolquhon Castle, about a mile away. Forbes was the 7th Laird of Tolquhon and was responsible for greatly enlarging and rebuilding the earlier medieval castle.

Sir William was the 7th laird of Tolquhon, a cultured man who preferred to remain removed from national affairs and live quietly, building his family's fortune. He created a fabulous residence at Tolquhon, and after finishing the castle he turned his attention to a suitably elegant tomb. The tomb was created in 1589 and Sir William was laid to rest beneath it in 1596.

The tomb is in the form of a canopied niche, over a chest carved with classical elements. On either side of the chest are small statues of Sir William and Lady Elizabeth. These are surrounded by grotesque animals and heraldic symbols.

The Tarves tomb is signposted at the entrance to the churchyard, just off the village square. You can park in the square, a few steps away from the kirk. Unfortunately, the gate at the entry to the tomb shelter is padlocked so you have to view the tomb from a safe distance of about a dozen feet away.

That isn't really a problem as the tomb is easily visible at that distance, but it does mean you can't get really close to the carvings and have a good look at the statues from up close.

From Tarves it is only a few minutes drive to Tolquhon Castle, the palatial residence created by Sir William. Alternatively, there is a countryside walk from the centre of the village to the castle. A bit further away is Haddo House, elegant home of the Earls of Aberdeen, while on a high hill just outside Tarves is the Ythsie Prop, a memorial erected to the 4th Earl by his grateful tenants.

As for the church itself, it was for many years in the possession of the Abbey at Arbroath. It is dedicated to St Englat (also known as Englatius), and a well dedicated to the same saint supposedly stands a short distance from the church. However, the saint appears to be a completely fictional creation, and the well is nowhere to be found.

We are perhaps firmer historical footing with the tradition that the church was founded by St Murdebur (Muirdebar), a 7th-century Irish missionary. 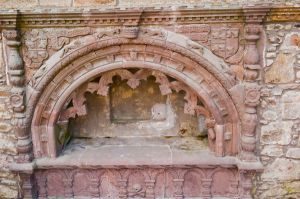 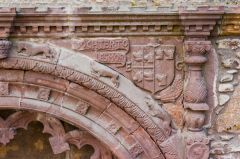 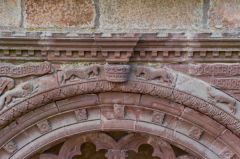