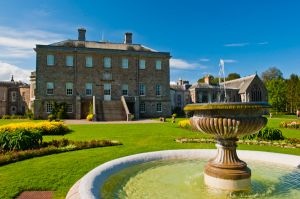 Haddo House has been the home of the Gordon family for over 600 years. The Gordons (first Earls and then Marquises of Aberdeen) first lived in a fortified tower house, of a type found in many places around Aberdeenshire. However, in the 1640s the house was badly damaged by Covenanters.

In the 1730s the 2nd Earl of Aberdeen pulled down the now dilapidated tower house and replaced it with a grand new house to mark his marriage to Anne, daughter of the Duke of Huntly. The Earl rather had his hand forced in the matter, as the bride's father insisted as part of the marriage agreement that the Earl provide a new house, suitable for his daughter's status. Perhaps the Duke was trying to assuage any guilt he felt at marrying his 19-year-old daughter to the Earl, who was all of 50 years old!

One of the most fascinating of the Gordons to inhabit Haddo was George, the 3rd Earl. George was known as 'the wicked Earl' for good reason. He had a legal marriage, to Catherine Hanson of Yorkshire, by whom he had 5 children. He also had a family at Ellon Castle, also in Aberdeenshire, and yet another at Cairnbulg, near Fraserburgh. Not content with 3 households in Aberdeenshire, he managed a fourth 'marriage', maintaining yet another household at Wiscombe Park in Devon. He seldom visited Haddo and died with his favourite mistress at Ellon. 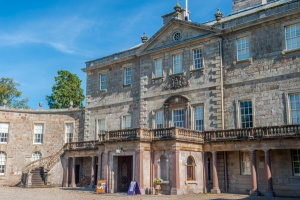 But back to the house; William Adam's work was altered in the 1820s by the 4th Earl, who encased the sweeping arcades on each side of the main house block, and raised the entrance to the first floor. Then in the 1880s, the 7th Earl called in Wright and Mansfield to redo the interiors in the style of Robert Adam style. So here you have a house interior designed by William Adam, redecorated to resemble a style made famous by his son.

The result is exquisite; never too grand, never too restrained, the interiors of Haddo House are a delight. One of the most interesting rooms is the Queen's Bedroom, so named because Queen Victoria slept here when she visited Haddo House in 1857. The queen asked to use it as she didn't like the state rooms set aside for her, so her bed had to be taken apart and reassembled in the new room! I'll bet the servants were thrilled, or perhaps they were used to it?

In an intriguing twist, the Queen's Bedroom, and the adjoining dressing room were later used as the birthing rooms when Haddo was transformed into a maternity hospital during World War II. Over 1000 births took place at Haddo between 1941-1945. The Marquis of Aberdeen gave a shilling of his own money to each of the 'Haddo Babies', which added up to quite a bit over the four years that Haddo operated as a maternity hospital! 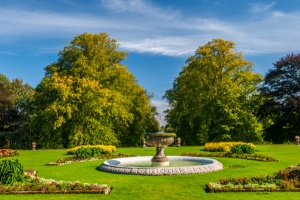 Formal gardens behind the house

An odd appendage to the south wing at Haddo is the family chapel, designed by GE Street, the pre-eminent church architect of the Victorian Gothic style.

The house is set in marvellous grounds, originally laid out by William Adam. There are elegant parterre gardens beside the house, and long avenues leading from these formal garden areas. On opposite sides of the house are the Scottish Mile avenue and the English Mile avenue. The Scottish Mile avenue is slightly longer, emulating the exact distance of Edinburgh's Royal Mile between Holyrood House and Edinburgh Castle!

Though you can explore the grounds of Haddo House on your own, to view the interiors you have to take a guided tour, available on a timed ticket system. I'm happy to report that these tours are excellent value, with very informed, interesting guides. They really tell you a lot about specific people and objects in the rooms, how they were used, even the history of objects, paintings, and people. The guides make it interesting for kids at the same time as adults, which is no mean feat!

Access to Haddo is by way of an extremely long single lane drive with passing places. Please note that the grounds have been turned into a country park, which is an extremely popular destination for families on sunny summer weekends when Haddo can be absolutely heaving with people. So if you are just coming to view the house, you might enjoy it more on a weekday. 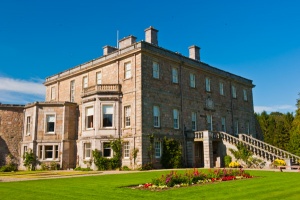 The garden front of the house 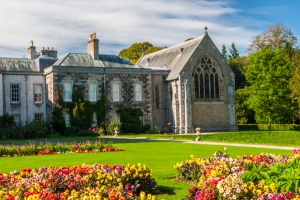 The gardens and chapel (right) 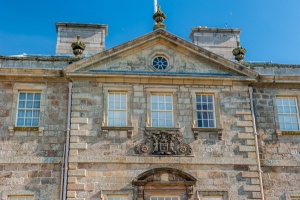 More self catering near Haddo House >> 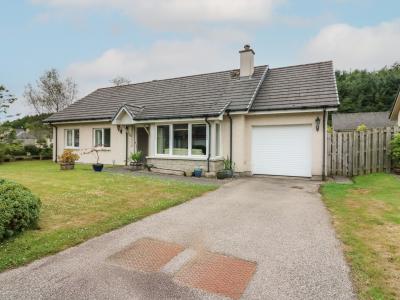