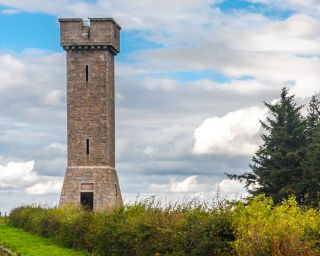 The Prop of Ythsie is a striking square tower built in 1861 as a memorial to the 4th Earl of Aberdeen. There are 91 steps to the top parapet, which gives wonderful views over the surrounding countryside. The style of the Prop is severe, even by Scottish Victorian standards, with a curving profile leading to an oversized parapet, so that it resembles a rook on a chessboard.

The Haddo Estate, who own the Prop, suggest that the proper pronunciation of Ythsie is 'icy'. Who are we to argue?

A simple marble plaque over the entrance says:

To George Hamilton Gordon, Fourth Earl of Aberdeen, By his attached and Grateful Tenantry. He was born at Edinburgh 28 Jan 1784 and died at London 14 Dec 1860.

Gordon served as Prime Minister during the Crimean War and owned Haddo House, which can be seen from the top of the Prop. He also convinced Queen Victoria to purchase Balmoral Castle during the monarch's visit to Haddo House. 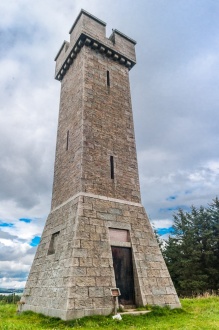 The monument was erected by public subscription, after his death, as his tenants were appropriately grateful for improvements carried out by Gordon on the Haddo Estate, for the benefit of local residents. It later became tradition to fly a flag from the top of the tower to mark the annual opening of the Haddo House Curling Club.

VISITING THE PROP OF YTHSIE

Getting to the Prop is half the fun; though it can clearly be seen from surrounding roads, there is no direct vehicular access. The Prop is signposted off the B999 south of Tarves. Take the signed turnoff onto a minor road, and after several hundred yards there is a small parking area to your left.

A footpath sign leads from the parking area, though there is no direct indication that it leads to the Prop (it does). Follow the footpath as it winds around the base of the hill, then starts its ascent up the edge of a farm field. The going can be wet and muddy, depending on the weather.

The Prop is visible through much of the ascent, which is neither difficult nor long. It should take no more than 15 minutes to reach the top of the hill. There is a small information sign at the base of the Prop, which looks as if it is in need of care.

When I opened the door with a screech of metal there was an alarmed flapping of wings from the upper reaches of the tower. Clearly, the interior is well-used by local birds, and they have left their mark everywhere.

A spiral stair, with a metal chain to hold on to, leads to the parapet, which is protected by iron bars, so there is no danger whatever of falling off. The views are excellent and include Haddo House and Tarves. It is rather dim inside the stairwell, so a torch would be useful, but not essential. Bird droppings proliferate inside the tower, so please be careful on the stairs.

Though the Prop is still owned by Haddo Estate, it is leased to Gordon District Council. The Council is at pains to point out that the Tower can be dangerous and those who climb it do so at their own risk. 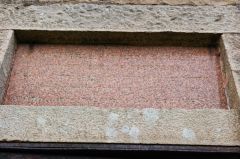 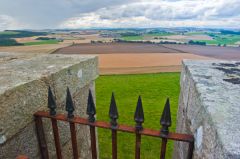 Nearest Accommodation to Prop of Ythsie:

More self catering near Prop of Ythsie >>

More Hotels near Prop of Ythsie >>

More bed and breakfasts near Prop of Ythsie >>