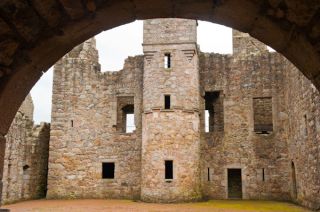 Tolquhon Castle is a beautiful medieval residence built around a 15th-century tower house. We do not know for certain who built the tower house, but it may have been the Prestons of Formartine. The tower was enlarged in 1580's by Sir William Forbes, the 7th Lord Tolquhon, who created a magnificent mansion around a central courtyard. In its day, Tolquhon must have been one of the most ornate and impressive residences in Scotland.
An inscribed panel beside the gatehouse entry to Tolquhon Castle tells you pretty well all you need to know: 'All this worke exep the auld tour was begun be William Forbes 15 April 1584 and endit be him 20 October 1589.' Rarely does the historical record give us such precise dates for building work!

Though the origins of Tolquhon predate William Forbes, it is almost entirely his efforts that survive in the present castle. And what efforts they were, for Forbe's creation is without doubt one of the most impressive of the late medieval castles which seem to sprout like mushrooms from the green earth of the Grampian countryside.

The oldest part of Tolquhon is Preston's Tower, a sturdy square tower to the north east of the courtyard, built in the early 15th century, possibly by Sir Henry Preston, lord of Formartine. When Sir Henry died without a male heir, the estate passed to his son-in-law, Sir John Forbes. This stumpy tower served as a fortified residence for the Forbes family until 1584. 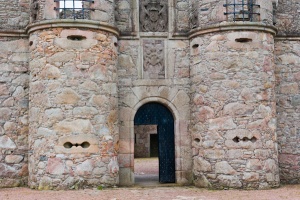 The main castle entrance
One fascinating feature to look out for is a secret hiding place set into the floor of the laird's bedchamber on the second floor, made to keep valuables hidden away - like a forerunner of a hidden safe.

Sir William Forbes, the 7th laird, came to the lairdship after his father's death at the Battle of Pinkie in 1547. Unlike most nobles of his day, Forbes preferred to retreat from court intrigue and leave affairs of state to others. He quietly built up his estates and steered well clear of the turmoil that beset his fellow nobles.

He was actively involved in charitable work and established a hospital at nearby Tarves. In 1584, already well advanced in years and in failing health, Forbes embarked on a remarkable program of rebuilding at Tolquhon. In the short space of 5 years, he transformed the castle from a fortified tower house with a surrounding barmkin, to a palatial residence, replete with a great hall, private chambers, kitchens, brewery, larders, pantry, library, and a gallery.

No sooner was the house complete than Sir William set about creating a grand tomb for himself and his wife, Elizabeth Gordon. This beautifully carved tomb can be seen in the churchyard at Tarves, and must stand as one of the most remarkable of its type in Scotland. 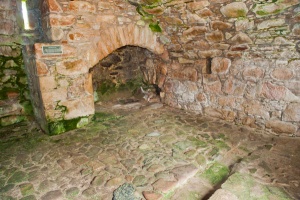 The Brewhouse
Unfortunately, the fortunes of the Forbes of Tolquhon, and of the castle, went into decline almost immediately after Sir William's death in 1596. The most famous of his descendants was Alexander Forbes, who saved the life of Charles II at the Battle of Worcester in 1651 and was knighted for his efforts. Unfortunately, Sir Alexander Forbes then invested in the ill-fated Darien Scheme, a speculative attempt to establish a Scottish colony in Panama.

The family debts were so high that Tolquhon had to be sold in 1716. However, the 11th laird, Sir William, refused to vacate the castle and had to be forcibly evicted by a troop of soldiers. The castle and estate were purchased by the Earls of Aberdeen, but Tolquhon's days as a noble residence were over, and it became little more than a farmhouse. Finally, in 1929 the castle was gifted to the Crown by the Earl of Haddo.

Tolquhon is built around a central courtyard, with Preston's Tower to the left of the main entrance. As you pass through the grand gatehouse entry you can't help but notice the beautifully carved coat of arms over the door, and the carved effigies to each side of the entry. One of these figures is probably William Forbes himself. Another curious feature of the gatehouse are the triplet gunloops set into the facade. These three-holed openings are angled so that a defender could quickly change his angle of fire to shoot straight ahead or to either side.

One of the other interesting interior features at Tolquhon is a secret chamber built onto an upper chamber of the south block. This may have been used by the laird for storing important documents.

One final feature at Tolquhon is an intriguing series of a dozen small niches built into the curtain wall surrounding the site. These niches were built to hold 'skeps', a form of woven beehive. Clearly, Sir William wanted to have a ready supply of honey to hand!

Though Tolquhon is a very short distance from the stately home of Haddo House, it is much quieter and receives only a fraction of the number of visitors. If you prefer a quiet, out of the way historic place to visit, consider Tolquhon as an alternative to Haddo, which can get extremely crowded on a sunny weekend. 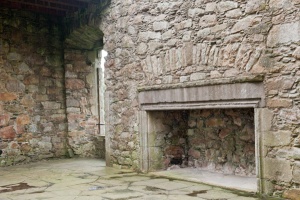 A fireplace in the Hall 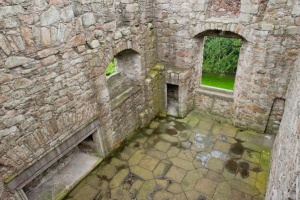 Looking down into the hall 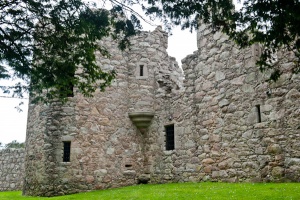 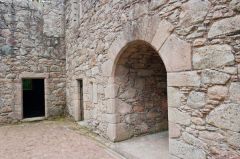 More self catering near Tolquhon Castle >> 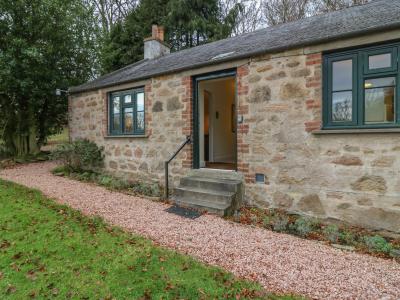 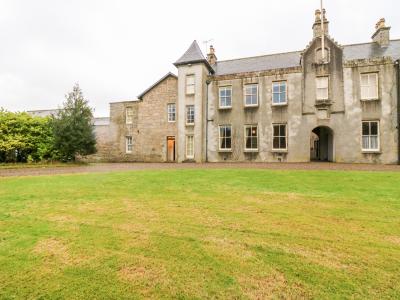 This property rests in Pitmedden, Scotland and can sleep seven people in four bedrooms.
Sleeps 7