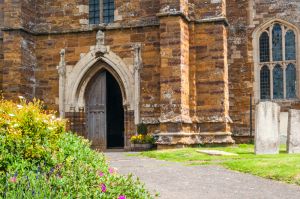 The parish church of St Andrew at Lyddington stands beside the remains of a medieval palace owned by the powerful Bishops of Lincoln. The earliest church here existed by the late 12th century, but the current building is mostly 14th and 15th century.

You enter by a west porch, where there are a pair of carved medieval grave slabs on display. There is a 15th-century rood screen, and early 15th-century wall paintings in the nave and over the chancel arch. The painting behind the pulpit is particularly fine.

Look high on the walls of the chancel, where you will see acoustic jars (now minus their necks) set into the thickness of the wall. These were installed on the theory that they would improve the acoustics. Another odd feature in the chancel is the communion rails, which completely surround the communion table.

This unusual arrangement came about in 1635 when Puritans wanted the altar moved into the body of the church but Archbishop Laud wanted it against the east wall. Bishop Williams of Lincoln suggested a compromise, and the altar was moved forward so the rails now enclose it like a fence.

Near the altar steps are a pair of late 15th-century brasses (hidden under carpeting when I visited). 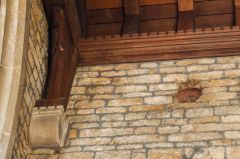 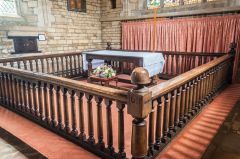 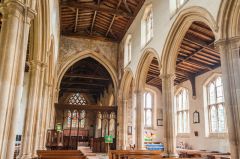