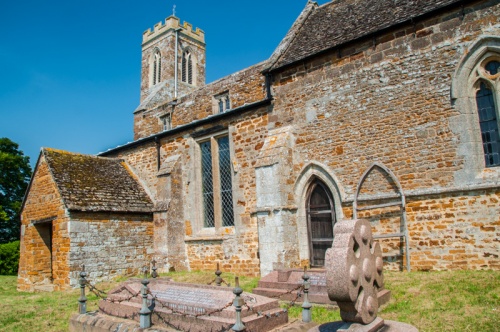 St Andrew's church in Stoke Dry is one of the most intriguing and evocative churches it has ever been my pleasure to visit. The hamlet - one can hardly call it a village - of Stoke Dry lies on a sloping hill looking down on the Eyebrook Reservoir, a few miles south of Uppingham and just inside the Rutland border.

Was the Gunpowder Plot hatched at Stoke Dry?

The church consists of a nave and two aisles, chancel, and south chapel, plus a parvis over the north porch. Ah, yes, the parvis (parvise). This small chamber was built in the late Tudor period in Perpendicular Gothic style and was intended to serve as a private chamber for the priest. It is in this small chamber that the Gunpowder Plot is traditionally rumoured to have been planned.

This association has been questioned; indeed, a similar tradition clings to the manor house at Ashton St Ledgers in Northamptonshire.

Let's look at the facts: in the early years of the 17th century, the manor of Stoke Dry was owned by the Digby family. Sir Everard Digby was one of the Gunpowder Plotters and was executed for his role in the unsuccessful attempt to blow up Parliament.

There is no proof that the parvis at Stoke Dry was used by the plotters, other than the association with the Digby family, so we are on pretty shaky ground attributing a place in history to the little chamber over the porch.

Unlike most surviving parvis chambers, this one is open to visitors, though the access is by way of a very narrow, winding stair with a low ceiling. 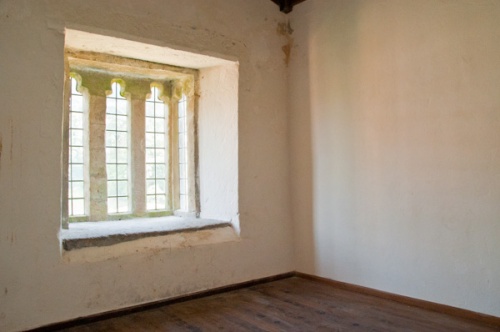 There is far more of interest in the church, however; there are surviving sections of Norman stonework in the north wall of the chancel and chapel. More striking by far are the columns on either side of the chancel arch. These columns are decorated with some of the finest Norman or late Saxon carving you are likely to find in any parish church in England.

Let's take the south column first. The original capital is missing, but the column is carved with wonderfully rich decorations depicting animals, foliage, and geometric designs. The south capital and column are still more richly carved. Among the carvings are animals, human figures, beasts, and birds.

The most interesting figure is that of a man clearly pulling on a bell rope. This is thought to be one of the earliest depictions of bell-ringing in England. A figure at the bottom of the column may be Satan trying to shut out the sound of the bell.

Between the nave and the chancel (and partly obscuring the carved pillars) is a carved 15th-century screen. This was probably brought here from another church as it does not fit the space very well.

Just behind the screen is an old Norman font bowl, and beside it is a bier dated 1694, upon which lie a Bible and Prayer Book dated 1856. There are two fragments of engraved stone memorials, one showing a man in 15th-century armour, thought to be Francis Clarke of Stoke Dry (d. 1435).

The other memorial fragment shows a man and woman in late medieval costume, the woman wearing a steeple headdress. Also in the chancel is a table tomb with effigies to Kenelme Digby (d. 1590), his wife, and their 11 children. On the floor beside the tomb is a 17th-century slab inscribed to Dorothy Stevens.

As you pass through an arched doorway from the chancel to the Digby Chapel you will find another table tomb, this time to another Everard Digby (d. 1540). The effigy of the deceased is quite elaborate, though worn, and shows him in full armour. 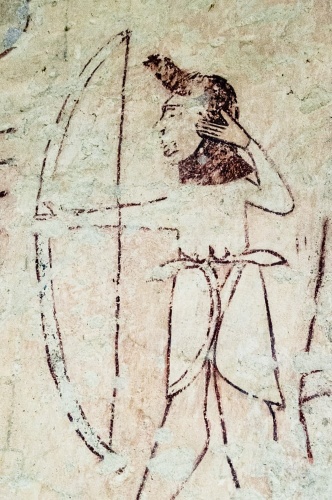 And now we come to the best feature of all; the wall paintings that adorn the south wall of the Digby Chapel. These date to the 13th century and depict St Christopher carrying the infant Jesus, and the death of St Edmund. Edmund is shown tied to a stake while archers shoot arrows at him.

Aside from the quality of the painting and their unusually well-preserved state, it is the likenesses of the bowmen that draw attention from scholars around the world. Though the church guide calls them Danish, a more common interpretation (though by no means universally accepted) is that the archers represent American Indians. Certainly, the physiognomy of the archers could represent native Americans.

According to visitor notes on display, an American visitor recently suggested that he could name the actual tribe represented by the painting of the archers. Is this proof that Europeans visited North America centuries before Columbus? Well, not proof, certainly, but it is intriguing to speculate! There are further fragments of medieval wall paintings in the chancel and along the nave clerestory.

Other points of interest around the church include the upright organ, dating to 1810. This was made by Lincoln of London and is worth noting because so few organs of this date remain in such an original condition. There is also an alabaster monument to Jaquetta Digby (d. 1496), wife of Everard Digby who died at the Battle of Towton in 1461.

St Andrew's is one of the most enjoyable historic churches I've had the pleasure to visit over the years; it exudes history, and I highly recommend a visit.