One of the best-preserved medieval castles in England, Skipton was begun by Robert de Romille sometime around 1090 AD. Romille chose a site above the Eller Beck where two important Roman roads converge, on a main transportation route through the Aire Gap in the Pennines.

Romille's castle was little more than a timber hall surrounded by a wooden palisade, with an inner and outer bailey in a traditional Norman design. The outer bailey was defended by a large gatehouse which was later rebuilt in stone. It seems likely that Skipton suffered during the 12th century and was perhaps partly destroyed.

It was at least partly rebuilt in stone between 1194 and 1241. In 1274 Skipton was seized by Edward I, but in 1307 his son, Edward II, granted it to his favourite, Piers Gaveston, but Gaveston only held Skipton for three years.

In 1310 a powerful Westmorland lord named Robert de Clifford acquired Skipton from the king, and he began to rebuild the castle in stone, adding a strong curtain wall and towers surrounding an inner ward.

It is doubtful that Robert ever saw his work completed, for he died at the Battle of Bannockburn in 1314. Robert's son Roger carried on his father's work of rebuilding Skipton, but he too came to an early end, executed for supporting Earl Thomas of Lancaster against King Edward II. 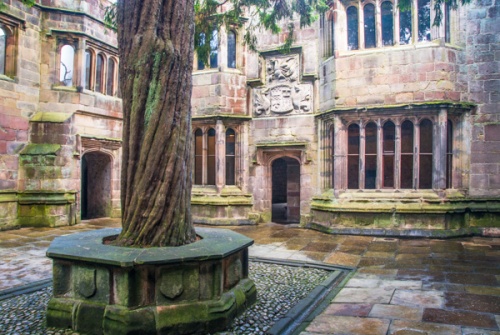 The Clifford lords maintained ownership of Clifton with one short interruption during the Wars of the Ross. During that struggle, the Cliffords supported the Lancastrian cause, and two lords of Skipton died in the fight.

John Clifford, nicknamed 'Bloody Clifford', was killed at Ferrybridge in 1461, and his heir, Henry Clifford, was forced to hide in the Cumbrian fells, disguised as a shepherd to escape his Yorkist enemies. In Henry's rural exile Skipton was seized by Edward IV, who granted it to William Stanley. In 1472 Stanley, one of the most powerful lords in England, exchanged Skipton for Chirk Castle on the Welsh border.

The new owner of Skipton was Richard, Duke of Gloucester, the king's brother, later to become Richard III. Richard seems to have taken a personal interest in Skipton, and used it as a principal residence. He probably granted money to extend nearby Holy Trinity church during his residence here.

When the Wars of the Roses ended after Henry Tudor's triumph over Richard III in 1485, the new king, now Henry VII, reinstated Henry Clifford, who was known henceforth as The Shepherd Lord for his rustic sojourn.

During the Civil War, Skipton was one of only two Yorkshire Castles to remain loyal to the crown. The castle was attacked by Parliament and only surrendered after a long and bitter siege in December 1645.

As they did with many castles that had been Royalist strongholds, Parliamentary leaders decided to 'slight' Skipton to make it unusable for military purposes. The slighting seems to have been only half-hearted, however. 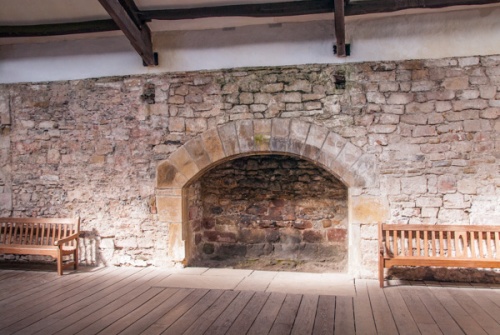 Whatever the damage inflicted by Parliament, it was soon to be made good, for Skipton Castle now came into the hands of the Clifford family heir, a remarkable woman named Lady Anne Clifford, Countess of Pembroke.

Lady Anne seems to have regarded it as something of a personal mission to restore her family's property throughout the north of England. She lavished her considerable wealth on Skipton, Brougham, Pendragon, Brough, Barden Tower and other fortresses in Cumbria and Yorkshire.

At Skipton she restored the defences, and, perhaps more importantly, rebuilt the living quarters to create a comfortable residence. It is largely the castle recreated by Lady Anne Clifford we see today at Skipton.

The main castle entrance is through a pair of massive round gatehouse towers, which lead to the centrepiece of Skipton; a lovely little cobbled courtyard, called Conduit Court, surrounded by a range of domestic buildings.

At the centre of the court, and filling much of it with spreading branches, is an ancient yew tree. One story says that the yew was planted by Lady Anne, but it seems likely that the tree is much older.

The remains at Skipton are largely from the 17th-century rebuilding, but enough remains of the medieval castle to get a clear picture of life here before 1500. There is a 14th-century kitchen with associated scullery chambers, a 13th-century watchtower, and to the west of the castle is the original 14th-century chapel.

There is no parking at the castle itself, but plenty of parking on streets nearby and the signposted town car park (fee applies). It can be a busy place on a sunny summer day, but the castle is big enough so that we really weren't put off by the number of people. The thing I recall most clearly is the Conduit Court, an absolutely delightful cobbled courtyard.

We came with our young children, and there was enough to do to keep even our easily bored daughter interested! I loved Skipton and would happily visit again. 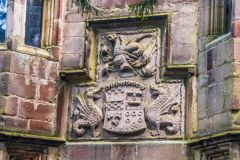 More self catering near Skipton Castle

Self Catering near Skipton