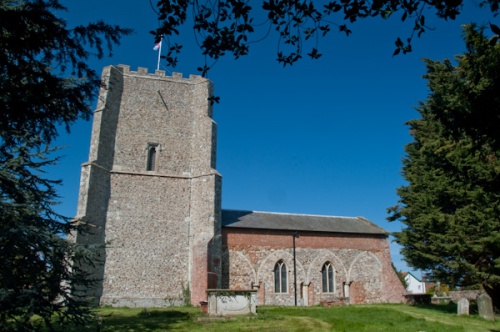 Bawdsey is almost literally 'the end of the road'. The little village lies on the north side of the River Deben, at the end of the Bawdsey peninsula. From here the road carries on to the old manor house of Bawdsey Manor, where radar was developed.

The Manor stands by the river bank, from whence you can take a ferry across to Felixstowe. But you are far from the bustle of busy Felixstowe here; here there is silence, the rustle of the wind and the remote sound of seabirds circling overhead.

Surely even the seabirds can appreciate the quiet little church below? Much of St Mary the Virgin is 14th century, with the addition of much mid-Victorian restoration. The restoration was necessary because the church caught fire on 5 November 1841, from Bonfire Night fireworks let off in the tower.

The tower was once 90 feet high but has now been truncated to only 60 feet. The nave, too, had to be shortened after the fire, so that both nave and chancel could be squeezed into the former nave.

The former nave arcades now form the external walls, a fact which is apparent if you stroll around the outside of the church. You can clearly see medieval columns strangely set in the wall, and trace the course of the old nave arches, now infilled with flint rubble and brick.

A pair of interesting historic features makes the interior of Badsey's church worth visiting. The first is rather easy to miss at first. Set against the wall of the nave is a simple plaque beneath a wall monument. The latter helps explain the presence of the former; the monument is to Edward Cavell of Bawdsey Hall (d. 1867).

Cavell was the great-uncle of Edith Cavell, the nurse who gained fame in the First World War when she was executed as a spy for helping Allied servicemen to escape.

The plaque below the Edward Cavell monument explains the Cavell connection to Bawdsey, tells of Edith Cavell's life, and displays a bronze medallion, dated 1919, presented to Bawdsey church by Colonel James Langley and his wife Peggy, of nearby Alderton village, just to the north of Bawdsey. The medallion depicts Edith Cavell and another nurse, Marie Depage, who worked with her and died in the sinking of the Lusitania in 1915. 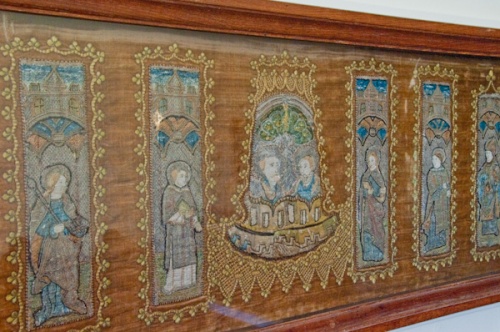 On a happier note, we can turn our attention to the other main feature of St Mary's, the altar frontal. But don't look for it on the altar, because it isn't there. Rather, look on the north wall, where a wooden display case has been set up to display this treasure.

The Altar Frontal is a mix of old and new; the old is a series of vertical Flemish panels, dated to the 13th century. These were originally part of a cope, or ceremonial cloak, and were later cut out from the cope and set on a brown velvet background sometime in the 19th century, when they were incorporated into an altar cloth.

Though some of the background stitching is Victorian, the figures are 13th-century originals. The cloth came from the private chapel in Badsey Manor and was given to the church by the Quilter family, who did much to restore and rebuild the church in the late Victorian period. Its a wonderful piece of medieval work, and though the subsequent alterations make it of no real monetary value, it is rare to see cloth so old outside a museum, and in such good repair.

Near the altar is a memorial to John Quilter of Bawdsey Manor, a WWI soldier who died at Gallipoli. Quilter was the son of W. Cuthbert Quilter, a brewing magnate whose family mausoleum stands outside the west door. 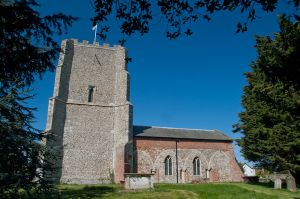 More self catering near Bawdsey, St Mary the Virgin Church >>