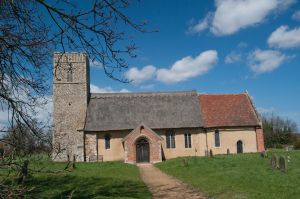 You could be forgiven for missing Butley's church, for it is nowhere near the village it serves. In fact, it seems to have wandered off on its own in the direction of Butley Priory and gotten lost halfway there.

We can't discuss Butley's church without at least a passing mention of Butley Priory. Just visible among the trees to the south of the church is the gatehouse of the former priory, founded in 1171 by Ranulph de Glanville. The priory at Butley was one of the richest in Suffolk, after only Bury St Edmunds, and possessed one of the largest monastic churches.

The gatehouse itself dates to the 14th century and is accounted one of the best examples of early 14th-century architecture in England. In the 18th century, it was converted into a luxurious home, and for a time it served as the vicarage. It is now the only real vestige of the medieval priory to remain.

But back to the church. St John's dates to the 12th century, with a Norman nave, chancel of about 1300, and a 14th century west tower. The south porch is 13th century, and the whole building was restored in 1686, such that much of the medieval character has been lost. In the north wall are three small Norman windows (two of these are blocked), and a blocked Norman door. There is another Norman window on the south wall, also blocked.

The medieval door has an interesting bit of graffiti on its inside face; you can clearly see the name Augustine Brooke carved there, with the date 1571. Perhaps Mr Brooke was responsible for restoring the door? The records of Butley Priory may shed some light on his identity. According to the records, a certain Austeyn Brook was one of the children being taught at the Priory in 1538.

He was probably the son of John Broke (d. 1534), who left his house and lands at Butley to his wife, and after her, to his daughter and sons, Thomas and Austeyn. In 1575 Augustine, or Austeyn, left his house and land here to his wife. It seems likely that the door was moved in 1571 from an exposed position outside the church to its current location, perhaps to mark the 400th anniversary of the founding of Butley Priory, by this former student of the priory.

As for the doorway itself, that is very nice Norman work, with an unusual chevron pattern carved on the arch.

Above the interior tower arch is a blocked sanctus bell opening. This opening was provided so that a bell-ringer in the tower could view the altar, and ring his bell when the host was raised by the priest.

The font is 15th century and is in a very good state. The base is decorated with carvings of four lions, a common motif in East Anglian fonts. The bowl is supported by carved angels with outstretched wings, and the bowl itself is divided into alternating panels of lions and angels bearing heraldic shields.

Probably the most interesting interior feature is the 15th-century rood screen, mostly devoid of paint now, but that's all to the good, for you can truly appreciate the lovely, intricate woodwork. The screen is divided into four traceried panels on each side of a central arched opening. It is a lovely piece of medieval work, and actually more enjoyable for not being brightly painted.

More self catering near Butley, St John the Baptist Church >>